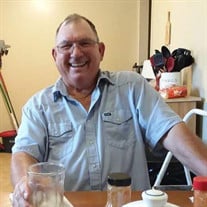 Funeral services for J T “Sonny” Kendrick, Jr. will be held Saturday, February 12, 2022 at 11:00 AM at the Parks Brothers Funeral Home Chapel in Okemah. Interment will follow at the Highland Cemetery in Okemah. J T Kendrick Jr. was born November 3, 1945 to J T Kendrick Sr. and Ethel Pearl (Ballenger) Kendrick. He passed away Wednesday, February 9, 2022 in Henryetta, Oklahoma at the age of 76. Sonny was a resident of the Okemah area all of his life and graduated from Pharoah High School. He and Judy Cathey were married June 5, 1964. Sonny was a farmer and rancher and also had worked in the oilfields. He loved his cattle, his family and going to the mountains. He enjoyed the Brain Trust of the Cowpokes Coffee Club and will be missed by his family and friends. He is preceded in death by his parents and two sisters, Brenda Jones and Janet Kampman. Survivors include his wife, Judy of the home; two sons, George Kendrick and wife Kristina of Celina, Texas and Allen Wade Kendrick of Okemah; his daughter, Penny Kendrick of Okmulgee; 7 grandchildren, Christopher Burney, Tyler Burney and wife Brittany, Ethan Kendrick, Jack Kendrick, Damon Kendrick, Jake Kendrick and Logan Kendrick and one great grandson, Oliver Zane Burney. Services will be under the direction of Parks Brothers Funeral Home, Okemah, and officiated by Bro. Terry Edminsten. Online condolences may be made at www.ParksBrothersFuneralHome.com.

The family of J T "Sonny" Kendrick Jr. created this Life Tributes page to make it easy to share your memories.

Send flowers to the Kendrick family.