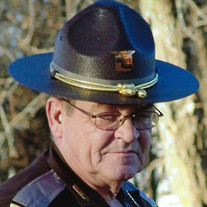 Funeral services for Jack Dewayne Choate will be held Monday, December 23, 2019 at 2:00 PM at the Skyview Baptist Church in Okemah. Interment will follow at the Highland Cemetery in Okemah with full honors. Jack Dewayne Choate was born November 26, 1945 in Hanna, Oklahoma to William Pink Choate and Elsie Mae (Urquhart) Choate. He passed away Monday, December 16, 2019 at his home in Okemah at the 74. Jack was a longtime resident of Okfuskee County and a 1964 graduate of Hanna High School. On July 9, 1966, in Weleetka, Oklahoma, he married Betty Kub. After High School, Jack worked as a barber in Edmond and later in Weleetka until 1970. From 1970 – 2006, Jack was a Trooper with the Oklahoma Highway Patrol. After retirement, he was elected Okfuskee County Sherriff from 2006-2015. He enjoyed woodworking, being on his tractor, camping and, when younger, riding motorcycles. He was also a deacon with the Skyview Baptist Church of Okemah. He is preceded in death by his parents; one sister, Velma Dean Ogle and three brothers, Roy, Troy and Bill Choate. Survivors include his wife, Betty Choate of the home; two sons, Jack Choate and wife Julie of Claremore, Oklahoma and Mike Choate and wife Tammy of Okemah; one daughter, Stacey Vass and husband Kevy of Paden, Oklahoma and 6 grandchildren, Jacob Choate of Norman, Joshua Choate of Claremore, Tanner Choate of Okemah, Tyler Choate of Okemah, Kamden Vass of Paden and Kerrigan Vass of Paden. Serving as active pallbearers will be the Oklahoma Highway Patrol Honor Guard. Honorary bearers include Max Henry, Bill Tanner, James Eastep, Steve Wagner, Bill Steele, John Hoagland and Shannon Smith. Services will be under the direction of Parks Brothers Funeral Home, Okemah, Oklahoma and officiated by Bro. David Hamilton, Chaplain Randall Miller and Eddy Bob Matthews. Online condolences may be made at www.ParksBrothersFuneralHome.com.

The family of Jack Dewayne Choate created this Life Tributes page to make it easy to share your memories.

Funeral services for Jack Dewayne Choate will be held Monday,...

Send flowers to the Choate family.