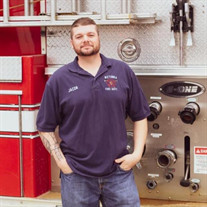 Funeral services for Jacob Israel Pack will be held Thursday, January 28, 2021 at 2:00 PM at the Assembly of God Church of Wetumka. Interment will follow at the Wetumka Cemetery. Jacob Israel Pack was born August 22, 1980 in Okmulgee, Oklahoma to Michael and Darrellyn (Seeley) Pack. He passed away, Wednesday, January 20, 2021 in Wetumka at the age of 40. Jacob was very active in the Wetumka community. He was a 1998 graduate of Moss High School and later received his associate’s degree in natural gas from Oklahoma State University. Jacob spent 16 years with the Wetumka Volunteer Fire Department and also worked with Enable Gas Company. The true love of his life were his children. Jacob was a wonderful father whose life revolved around his children. He loved to go fishing, hunting, ranching and playing in the mud with his toys. He will be dearly missed by all who knew him. He is preceded in death by his sister, Jamie Pack and grandfather, Darrell Seeley. Survivors include his three sons, Jaxson, Jayden and Jace of Wetumka; daughter, Makala of Wewoka; his parents, Michael and Darrellyn Pack of Wetumka; two brothers, Michael Pack and wife Kylie of Wetumka and their children, Jozeph and Iva and Joshua Pack and wife Ashley of Colorado and their children, Daxton and Kimberlyn; sister, Sharon Guinn and husband Billy Ray of Wetumka and their children, Blake, Avery and Olivia; grandparents, Dee and Coleena Pack of Wetumka and Linda Seeley of Wetumka. He is also survived by Kerra Pack of Wetumka and a host of aunts, uncles and dear friends. Serving as active pallbearers will be Billy Ray Guinn, Joshua Pack, Shawn Jones, Blake Tyler, Logan Bellinger, Brett Seeley and John Ellis. Honorary bearers include Jaxson Pack, Jayden Pack, Jace Pack, Jozeph Pack, Michael Pack and Brad Leftwich. Services will be under the direction of Parks Brothers Funeral Home, Wetumka, Oklahoma and officiated by Pastor Curt Bellinger. Online condolences may be made at www.ParksBrothersFuneralHome.com.

Funeral services for Jacob Israel Pack will be held Thursday, January 28, 2021 at 2:00 PM at the Assembly of God Church of Wetumka. Interment will follow at the Wetumka Cemetery. Jacob Israel Pack was born August 22, 1980 in Okmulgee, Oklahoma... View Obituary & Service Information

The family of Jacob I. Pack created this Life Tributes page to make it easy to share your memories.

Funeral services for Jacob Israel Pack will be held Thursday,...