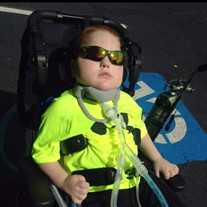 Jaden Michael Lacroix Losh was born February 5, 2010 in Shawnee, Oklahoma to Jeff and Kristi (Clark) Losh. He passed away Saturday, September 5, 2020 in Tulsa Oklahoma at the age of 10. He is preceded in death by Fred Clark, Charles Guinn,... View Obituary & Service Information

The family of Jaden Michael Lacroix Losh created this Life Tributes page to make it easy to share your memories.

Send flowers to the Losh family.