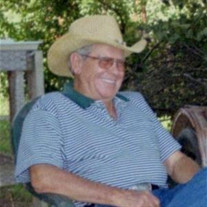 A celebration of life for James Leland Bennett will be held Saturday, February 17, 2018 at 1:00 PM at the First Baptist Church Life Center in Okemah. Immediately following will be a reception also at the Family Life Center until 3:00 PM. James Leland Bennett was born March 6, 1936 in Okfuskee County Indian Territory, Oklahoma to James Henry Bennett and Ethyl (Crow) Bennett. He passed away Saturday, February 10, 2018 at his home near Last Chance, Oklahoma at the age of 81. James was a resident of Last Chance, Oklahoma and a 1954 graduate of Okemah High School. In 1957 he and Joyce Beasley were married. From that marriage came four children, Michael, Terri, Jama and Sandra. He and Dorothy “Dotte” Bennett were married September 4, 1981 in Picayune, Mississippi. James worked many years and later retired as an Aerospace and Defense Technician. James also served his country with the United States Army during the Korean Conflict. He enjoyed hunting and fishing and especially loved ranching. He was the proud owner of the Last Chance Ranch. He is preceded in death by his parents; three sisters and three brothers. Survivors include his wife, Dorothy “Dotte” Bennett of the home; one son, Michael Bennett and wife Mary of Diamondhead, Mississippi; three daughters, Terri Bennett of Last Chance, Oklahoma, Jama Barnes of Picayune, Mississippi and Sandra Bennett of Long Beach, Mississippi; two brothers in law, Danny O’Steen and wife Ada of Terrell, Texas and Joe B. Parker of Augusta, Kansas; one sister in law, Gladys Bennett of Okemah; seven grandchildren, Lori Burgess and husband Kurt of Tulsa, Jill Smith of Pass Christian, Mississippi, Kimberly Lizana and husband John of Pass Christian, Mississippi, Jessica Smith of Picayune, Mississippi, Kelsi Bennett-Barnes of Longbeach, Mississippi, Taylor Bennett of Chicago, Illinois and Becca Trotter and husband Daniel of Jackson, Mississippi and 12 great-grandchildren, Dalton, Delaney, Draden, Chase, Makenzie, Tyler, Emily, Braeden, Breauna, Brailey, Makinley and Anna-Fairley. Services will be under the direction of Parks Brothers Funeral Home, Okemah, Oklahoma. In lieu of flowers, donations may be made to St. Jude’s or to Heritage Hospice of Henryetta, Oklahoma in memory of James.

A celebration of life for James Leland Bennett will be held Saturday, February 17, 2018 at 1:00 PM at the First Baptist Church Life Center in Okemah. Immediately following will be a reception also at the Family Life Center until 3:00 PM. James... View Obituary & Service Information

The family of James Leland Bennett created this Life Tributes page to make it easy to share your memories.

A celebration of life for James Leland Bennett will be held Saturday,...

Send flowers to the Bennett family.