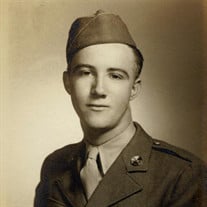 Funeral services for James Carl Warrington will be held Friday, July 17, 2020 at 2:00 PM at the First Baptist Church of Cromwell. Interment will follow at the Little Cemetery with military honors. James Carl Warrington was born November 3, 1924 in Claremore, Oklahoma to Jake Wesley Warrington and Gracie (Tincup) Warrington. He passed away Monday, July 13, 2020 at his home in Cromwell, Oklahoma at the age of 95. Mr. Warrington was a resident of Seminole County all of his life and a resident of the Cromwell area most of his adult life. He and Cleo Brewer were married January 28, 1949 in Seminole, Oklahoma. Mr. Warrington proudly served his country with the United States Army during WWII. He also enjoyed hunting, fishing and especially gardening. He was a deacon at the Cromwell First Baptist Church and a member there for 70 years. He is preceded in death by his parents; one daughter, Pamela Grace Morgan; three brothers, Melvin, Eugene and Robert; one sister, Violet Webber and son in law, Ralph Haddox. He is survived by his wife, Cleo Warrington of the home; one son, Edmond Carl Warrington and wife Gayle; daughter, Nancy Hope Haddox; son in law, Danny Morgan; one brother, Virgile and wife Sharon; sister in law, Edith Warrington; 7 grandchildren, Shelly Dodson and husband Gene, Russell Warrington and wife Audrey, Emily Meerbott and husband Trey, Kevin Warrington and wife Amanda, Jonathan Haddox and wife Kelli, Kara Keesee and husband Andrew and Riley Morgan and 9 great-grandchildren. Serving as active pallbearers will be Sean Brewer, Gene Dodson, Alan Orrell, Russell Warrington, Kevin Warrington and Jonathan Haddox. Honorary pallbearer will be Riley Morgan. Services will be under the direction of Parks Brothers Funeral Home, Okemah. Online condolences may be made at www.ParksBrothersFuneralHome.com. The family requests that those who choose to attend the service please wear a mask and practice social distancing. They also understand and appreciate those who choose not to attend during these difficult times. The service will be streamed live through the Parks Brothers Funeral Home Facebook Page for those who cannot attend.

The family of James Carl Warrington created this Life Tributes page to make it easy to share your memories.

Funeral services for James Carl Warrington will be held Friday,...

Send flowers to the Warrington family.