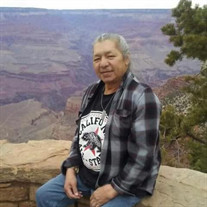 Funeral Services for Jim Johnson Jr. will be held Tuesday, March 23, 2021 at 2:00PM in the Chapel of Parks Brothers Funeral Home in Wetumka, Ok. Interment will follow at Salt Creek Cemetery in Wetumka, Ok. Jim Johnson Jr. was born in Oklahoma City, Ok. November 13, 1956 to, Jim Johnson Sr. and Lela Mae Foley. He passed away, Wednesday, March 17, 2021 in Tulsa, Ok. at the age of 64. Jim grew up and attended school in Holdenville. Where he also met his longtime friend, Herman Brown. The two were inseparable and would join the military as they got older. They did a tour in Germany together. Jim speaks of his time in the military and how he enjoyed jumping out of helicopters. Junior, as he was known to many, then went on to become a journeyman lineman for Canadian Valley. Where he enjoyed his work. Later on, in life he did a lot of traveling, which he loved. He toured the U.S. twice. But his favorite place to be out west, in the New Mexico area. Jim returned home to Wetumka, Oklahoma to spend time with family and friends. As he would always tell his girls, “See you later Alligator, After while Crocodile. Love you babies.” He is preceded in death by his parents, and sister, Helen. Junior is survived by his daughters, Brandi Givens and significant other, Thomas Canard of Muskogee, Oklahoma, Nicole Lefthand of Ft. Worth, TX, and Rachel Johnson and wife Cindy of Shawnee, Oklahoma, , 2 brothers, Robert Sacredhorse, and David and wife Sharon Johnson of Newcastle, Ok. He is also survived by 9 grandchildren and numerous family and friends. Pallbearers are John Thomas Jr., Christopher Flanagan, Terrence Yahola, Thomas Canard, Garrett Mantooth, and Osceola Powell. Services will be under the direction of Parks Brothers Funeral Home, Wetumka, Oklahoma and officiated by Mark Smith. Online condolences may be made at www.ParksBrothersFuneralHome.com

The family of Jim Johnson Jr. created this Life Tributes page to make it easy to share your memories.

Send flowers to the Johnson family.