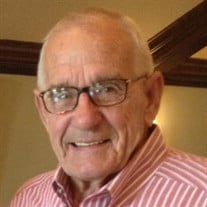 A memorial service for John Kerry Baker will be held Wednesday, October 16, 2019 at 2:00 PM at the Parks Brothers Funeral Home Chapel in Okemah. John Kerry Baker was born July 20, 1936 in Okmulgee, Oklahoma to George H. Baker and Cloren Henley Baker. He attended grade school and high school in Okmulgee, where he served on Student Council and was President of his Senior Class in 1954. After High School, he enlisted in the US Army and served three years, mostly in Germany during the Cold War. Upon his return, he attended the University of Oklahoma where he met Maeva, the love of his life. He was a proud member of the Sigma Chi fraternity and in 1961 Kerry graduated with a Business Administration degree in Finance. Kerry and Maeva were married on December 26, 1959 in Okemah, Oklahoma. After college, they moved to Okemah where he was the Director of the Community Action Agency, serving on the water authority, Volunteer Fire Department, Jaycees and was Chairman of the Pioneer Day Celebration. He also owned and operated Baker Insurance Agency. For several years, Kerry worked for a tire company and was named Salesman of the Year six times! In 1972, they moved to Seminole, where he owned Baker Service Station. He also worked in the oil patch as a Drilling Superintendent. When the oil prices deflated, he ran for County Commissioner and was elected to serve four years. He then went to work for the Oklahoma Tax Commission, the job from which he retired. Kerry and Maeva had five children, nine grandchildren and five great-grandchildren. Kerry loved to play golf and watch Sooner football games and Oklahoma City Thunder basketball. During his “retirement” years, Kerry worked for Enterprise where he would deliver cars in the surrounding states with a wonderful group of fast-made friends. He retired (again) and they moved to Paoli in 2013. He is preceded in death by his infant son John Everett Baker, his mother and father, and his granddaughter, Emily Capps. Survivors include his wife, Maeva Baker, one son, Clark Baker and wife Kami, three daughters, Claire Lemmings, Kerrie Ann Suarez and husband J.R., and Carole Baker; one brother, David Baker and wife Daryl; eight grandchildren, Curtis, Leah, Lauren, Lane, Tanna, Kaci, Carter, and Cristin and five great-grandchildren, Marlee, Bennett, Madeline, Cooper and Casch. My grandpa was a hard worker and taught us all so many important life lessons. He taught us how to be respectful, how to be kind, and how to love each other. My Grandad, or “Boompa” as we called him, leaves us with many fond memories and stories we’ll continue to tell again and again. Always laughing as we tell them, too, because with Grandad, there was never a dull moment. Rest easy, we love you! Services will be under the direction of Parks Brothers Funeral Home, Okemah, Oklahoma. Online condolences may be made at www.ParksBrothersFuneralHome.com.

The family of John Kerry Baker created this Life Tributes page to make it easy to share your memories.

A memorial service for John Kerry Baker will be held Wednesday,...

Send flowers to the Baker family.