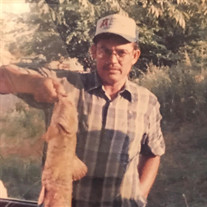 Funeral services for Johnie Hicks will be Thursday, December 31, 2020 at 2:00 PM at the Parks Brothers Funeral Home Chapel in Okemah. Interment will follow at the Hicks Family Cemetery north of Okemah. Wake services will be Wednesday, 3:00 – 8:00 PM also at funeral home chapel. On the morning of December 27, 2020, with his family by his side, Johnie heard his call to go to his heavenly home. Johnie Hicks was born to Jesse and Lorene Hicks on April 18, 1945. He is preceded in death by his mother, Lorene; his father, Jesse and one brother, Terry. He is survived by his wife, Daria; four daughters, Meggie, Kristina, Amy and Monica; six grandchildren, including Emily and Jalen who were the loves of his life and two great-grandchildren with one on the way. He also leaves behind one brother, Simmer and five sisters, Aggie, Louannie, Mary, Annie and Rita. Johnie began his Christian journey at Greenleaf Baptist Church. From there he later became a deacon. He was ordained as a minister on December 18, 2014 at Trenton Baptist Church and later became the pastor where he served until he was called home. Johnie enjoyed spending time with his family and grandchildren. He loved to go fishing and watching football and basketball. He also loved preaching the word so that people would know God’s love. He preached the word until his health started going downhill. Even when he became ill, he still wanted to do the Lord’s work because he knew that the Lord had more work for him to do. He will be missed by many family and friends. Services will be under the direction of Parks Brothers Funeral Home and officiated by Gene Harjo and Houston Tiger. Online condolences may be made at www.ParksBrothersFuneralHome.com. Those who attend the services will be required to wear a mask.

Funeral services for Johnie Hicks will be Thursday, December 31, 2020 at 2:00 PM at the Parks Brothers Funeral Home Chapel in Okemah. Interment will follow at the Hicks Family Cemetery north of Okemah. Wake services will be Wednesday, 3:00... View Obituary & Service Information

The family of Johnie Hicks created this Life Tributes page to make it easy to share your memories.

Funeral services for Johnie Hicks will be Thursday, December...

Send flowers to the Hicks family.