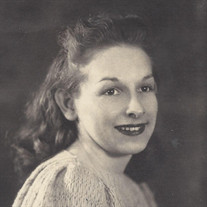 Funeral services for Johnnie LaVon Sexton will be held Saturday, December 21, 2019 at 10:30 AM at the Parks Brothers Funeral Home Chapel in Okemah. Interment will follow at the Highland Cemetery in Okemah. Johnnie LaVon Sexton was born September 29, 1925 in Struggleville, Oklahoma to Hugo Richard Finke and Winnie Faye (Martin) Finke. She passed away Wednesday, December 18, 2019 in Tulsa, Oklahoma at the age of 94. Mrs. Sexton was a longtime resident of Tulsa, Oklahoma and past resident of Okemah. She and William Carl Sexton were married December 30, 1946 in Independence, Kansas; he later preceded her in death May 9, 1999. Mrs. Sexton was a loving homemaker who enjoyed her pets. She also worked as a Rosie the Riveter with Spartan of Tulsa and as a thrift store manager. She was a devoted volunteer with Meals on Wheels and with her church, the Redfork Church of God in Tulsa. Mrs. Sexton also loved spending time with her children and grandchildren. Also preceding her in death were her parents; one brother, Herbert Finke and one sister, Lois Faye Finke. Survivors include her two sons, Jonathan Sexton of Claremore, Oklahoma and Micah Sexton and wife Suzie of Stillwater, Oklahoma; one daughter, Carla Ehlers of Indian Hills, Colorado; one brother, Hugo Richard Finke and wife Margaret of Seminole; four grandchildren, Abby, Audrey, Jonathan and Joshua Sexton and four great-grandchildren, Ryan, Shady, Chasidy and Logan. Services will be under the direction of Parks Brothers Funeral Home, Okemah, Oklahoma and officiated Rev. Ken Farnham. Online condolences may be made at www.ParksBrothersFuneralHome.com.

The family of Johnnie LaVon Sexton created this Life Tributes page to make it easy to share your memories.

Funeral services for Johnnie LaVon Sexton will be held Saturday,...

Send flowers to the Sexton family.