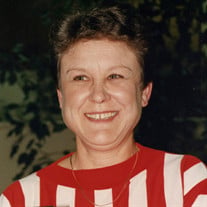 Judy Kay (Payne) Wester was born to Katheryn Beatrice (London) and Walker Fred Payne on July 18, 1941, in Okemah, Oklahoma. She was the youngest of their 15 children. God called Judy home on Friday, February 7, 2020, at the age of 78 after a long struggle with Alzheimer's. She attended elementary and high school at Excelsior in Seminole County. On November 7, 1960, Judy married Willie Joe Wester of Pharoah, Oklahoma. They resided in California, Arkansas, Texas, and most recently in Oklahoma. Born to this union were two children, Dale and Lance. Judy was a faithful wife of nearly sixty years and a devoted mother. After the boys were grown, she worked at Mensor LP for 12 years and then retired. One of her favorite pastimes was volunteering at Central Texas Medical Center, where she served for 15 years. Judy enjoyed traveling to visit relatives and friends. She was loved by everyone and will be greatly missed. Judy is survived by her husband Joe of Checotah, Oklahoma; son Dale Wester and wife Machella of Republic, Missouri; son Lance Wester and wife Carol of Staples, Texas; grandchildren Rebecca, Dylan, and Natalie; and great-grandchildren Grace and Laura. Survivors include one sister and three brothers: Nova Collier of Midwest City, Oklahoma; Doug Payne of Mead, Oklahoma; Patrick Payne and wife Debbie of Shawnee, Oklahoma; and Richard Payne and wife Jerrie of Duncan, Oklahoma. She also leaves behind many other family members and friends. Judy was predeceased by her parents and six sisters: Gladys Collins, Lucille Myers, Willa Faye Roman, Jo Dean Thomas, El Reno Kinslow, and Mary Neal Robinson. She was also preceded in death by four brothers: Woodrow Payne, Warren Payne, Bob Payne, and Jim Payne. Visitation at Parks Brothers Funeral Home in Okemah will be from 6:00 to 8:00 p.m. on Thursday, February 13th. A funeral service will be held at 11:00 AM on Friday, February 14, 2020, at the Parks Brothers Funeral Home, 301 North Third Street, Okemah, Oklahoma 74859. Burial will follow at Likowski Community Cemetery in Pharoah, Oklahoma. Services will be under the direction of Parks Brothers Funeral Home and officiated by Tim Allen. Memorial contributions may be made to Alzheimer's Association or Alzheimer's Research Foundation.

Judy Kay (Payne) Wester was born to Katheryn Beatrice (London) and Walker Fred Payne on July 18, 1941, in Okemah, Oklahoma. She was the youngest of their 15 children. God called Judy home on Friday, February 7, 2020, at the age of 78 after a... View Obituary & Service Information

The family of Judy Kay Wester created this Life Tributes page to make it easy to share your memories.

Send flowers to the Wester family.