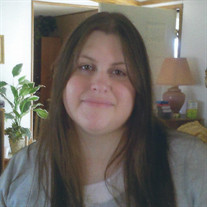 Funeral services for Kari Janeen Tilley will be held Thursday, August 20, 2020 at 11:00 AM at the Parks Brothers Funeral Home Chapel in Okemah. Interment will follow at the Highland Cemetery in Okemah. On May 6, 1982, a precious little girl named Kari Janeen Tilley was born at the Shawnee Medical Center to James W. and Scharlene (Smith) Tilley. She passed away on August 16, 2020 at the Midwest City Medical Center at the age of 38 years after a long illness. Kari attended school at Oakes Elementary and Noble Middle School of Okemah before moving to Midwest City in 1993, where she attended Traub and Carl Albert Schools. She loved learning and self-taught herself on many subjects, including computers and technology. She loved photography and became very proficient in producing beautiful pictures and scenes. She loved nature and enjoyed watching the birds and squirrels and other animals, as well as the gorgeous sunrises and sunsets. The skies held quite a fascination for her - - the clouds, the moon, the lightening, the rolls of thunder and the stars. After each family member died, she would name a star after each of them. Now, the brightest new star shining is our beloved Kari. She loved her family immensely and enjoyed every family reunion and get together. She was dedicated to God as a baby by Rev. J.E. Warn and at the age of eight years, she was baptized. She attended the United Pentecostal Churches of Okemah and Castle, and at the time of her death, she was a member of the United Pentecostal Church of Midwest City. Although developing health problems prohibited her from actually attending, she played a big role in the operation of the church. She was really a prayer warrior, and her prayers helped many to be healed and to get salvation. Preceding her in death were many of her family, including her Dad, James W. Tilley; her stetp-father, Floyd Moore; her paternal grandparents, Jim and Maggie Tilley and her maternal grandmother, Mae B. Smith. Also seven uncles, Ted Cates, Edward and Arlie Smith; Charles, Herbert and Bob Tilley and Jimmy Stevenson; three aunts, Elaine Cates, Jean Reno and Lavonne Whitson. Also, her beloved little dog of 18 years, Jett. Survivors include her mother, Scharlene Moore of Nicoma Park; four aunts, Joan Smith of Nicoma Park, Charla Smith of Dewar, Frances Smith of Henryetta and Ruby Stevenson of Tulsa. She is also survived by a host of cousins and friends and a big, loving German Shepard, Kylie. Services will be under the direction of Parks Brothers Funeral Home and officiated by Bro. William Monden. Online condolences may be made at www.ParksBrothersFuneralHome.com.

Funeral services for Kari Janeen Tilley will be held Thursday, August 20, 2020 at 11:00 AM at the Parks Brothers Funeral Home Chapel in Okemah. Interment will follow at the Highland Cemetery in Okemah. On May 6, 1982, a precious little girl... View Obituary & Service Information

The family of Kari Janeen Tilley created this Life Tributes page to make it easy to share your memories.

Funeral services for Kari Janeen Tilley will be held Thursday,...

Send flowers to the Tilley family.