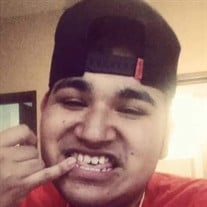 Funeral services for Kaylon Rene Wise Talamasey will be Thursday, July 2, 2020 at 2:00 PM at the Greenleaf Baptist Church of Okemah. Interment will follow at the Johnson Family Cemetery near Okemah. Wake services will be Wednesday evening also at the Greenleaf Baptist Church. Kaylon Rene Talamasey was born January 24, 1993 in Tulsa, Oklahoma to Lana Stevens. Kaylon attended Tulsa Public Schools, Whittney Middle School, Nathan Hale High School his freshman year and graduated from Sapulpa High School. After high school he attended the College of the Muscogee Nation to study business. Kaylon enjoyed fishing, hunting, football, spending time in the casino and playing wheelchair basketball in Tulsa. He spent most of his time on Xbox Live where he met lots of people from all over the world through Call of Duty and other games. Kaylon has touched many lives with his heart of Gold. He was a loving brother, uncle, son and friend. On June 27, 2020, Kaylon was called home to be with the Lord and Savior. Preceding him in death were his grandparents, Andrew Wise Talamasey and Shirley Ann Talamasey and brother, Isaiah Fields. Kaylon is survived by his mother, Lana Stevens of Shawnee, Oklahoma; partner, Jalena Harjo of Tonkawa, Oklahoma; siblings, Andrea Talamasey of Tulsa, Adana West of Okemah and Kyla West of Wewoka. He is also survived by a host of other relatives and dear friends who will miss him. Serving as active pallbearers will be Edward Burks, Tyler Barnett, Nathan Postoak, Josh Littlebear, Charles Screechowl and Patrick Bender. Honorary bearers include Edward Burks, Jr., Aidran Postoak, Felix Martinez, Noah Harjo, Adam West and William Knight. Services will be under the direction of Parks Brothers Funeral Home and officiated by Rev. Houston Tiger. Online condolences may be made at www.ParksBrothersFuneralHome.com.

Funeral services for Kaylon Rene Wise Talamasey will be Thursday, July 2, 2020 at 2:00 PM at the Greenleaf Baptist Church of Okemah. Interment will follow at the Johnson Family Cemetery near Okemah. Wake services will be Wednesday evening... View Obituary & Service Information

The family of Kaylon Rene Talamasey created this Life Tributes page to make it easy to share your memories.

Funeral services for Kaylon Rene Wise Talamasey will be Thursday,...

Send flowers to the Talamasey family.