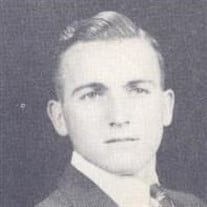 A memorial service for Keith Quinton Magness will be held Friday, February 15, 2019 at 2:00 PM at the Okemah Church of Christ. Inurnment will follow at the Weleetka Cemetery. Keith Quinton Magness was born February 16, 1927 in Heber Springs, Arkansas to David William “D.W.” Magness and Lizzie (Davis) Magness. He passed away Wednesday, January 30, 2019 in Okemah, Oklahoma at the age of 91. Keith was a resident of the Okemah area all of his life and was a graduate of Weleetka High School. He and Dona Rae Smith were married August 15, 1951; she preceded him in death February 27, 2007. Keith was a longtime rancher who enjoyed raising cattle and hogs. He also loved playing basketball, making candy and especially spending time with his grandkids. Also preceding him in death were his parents; three brothers, one sister and eight half brothers and sisters. Survivors include his son, Keith “Chipper” Quinton Magness and wife Mary of Okemah; one daughter, Elizabeth Been of Castle; one sister, Ruth Cook of Seattle, Washington; three grandchildren, Keith Quin Magness III and wife Courtney, D.W. Magness and wife Carlee and Katherine Lee Ashcraft and four great-grandchildren, Kade, Collin, Cash and Scarlett. All arrangements were handled by Parks Brothers Funeral Home, Okemah, Oklahoma.

The family of Keith Quinton Magness created this Life Tributes page to make it easy to share your memories.

A memorial service for Keith Quinton Magness will be held Friday,...

Send flowers to the Magness family.