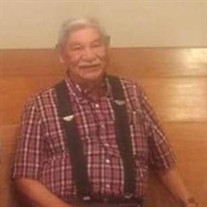 Funeral services for Kenneth Eugene Berryhill will be held Tuesday, January 11, 2022 at 2:00 PM at the Creek Chapel Methodist Church of Okemah, Oklahoma. Wake services will be Monday, 6:00 – 8:00 PM at the Parks Brothers Funeral Home Chapel in Okemah. Interment will follow the funeral service at the Berryhill Family Cemetery in Okemah with full military honors. Kenneth Eugene Berryhill was born August 14, 1936 to Andy and Annie (Wind) Berryhill. He passed away Thursday, January 6, 2022 at his home in Wewoka at the age of 85. Kenneth was a retired law enforcement officer and United States Marine. He proudly served his country with the United States Marine Corps for 20 years before retiring. After his military service, He went to work with the Seminole County Sherriff’s Department as deputy sheriff. He later worked at Tinker Airforce Base before moving back to the Okemah area where he became a campus police officer at OSU Tech in Okmulgee. He eventually went to work with the Wewoka Police Department where he became assistant chief before his final retirement. Kenneth loved his church, the Creek Chapel Methodist Church of Okemah, and watching football. He will be dearly missed. He is preceded in death by his parents; his wife, Jewel Berryhill; his daughter, Kenna Elouise Berryhill; three brothers, Jesse, Jerry and Ed and one sister, JoVonna Robison. Survivors include his two sons, Rusty and Tamara Berryhill of Okemah and Joshua and Samantha Berryhill of Wewoka; five grandchildren, Mia Jewel Berryhill, Russell Berryhill Jr., Tacia Berryhill, Lachelle Berryhill and Anderson Berryhill and 9 great-grandchildren, Kyran Berryhill, Elan Hicks, Eniyah Hicks, Andraya Berryhill, Jakob Berryhill, Alijah Berryhill, Micco Berryhill, Keaston Riley and Thomas Riley. Services will be under the direction of Parks Brothers Funeral Home and officiated by Rev. Edwin Jimboy.

The family of Kenneth Eugene Berryhill created this Life Tributes page to make it easy to share your memories.

Funeral services for Kenneth Eugene Berryhill will be held Tuesday,...

Send flowers to the Berryhill family.