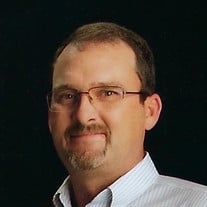 A memorial service for Kevin Floyd Counts will be held, Friday, September 10, 2021 at 2:00 PM at the Parks Brothers Funeral Home Chapel in Okemah, Oklahoma. Kevin Floyd Counts was born on the 18th of December in Henryetta, Oklahoma to his loving parents, Floyd Junior and Vera (Cheshire) Counts. Kevin married Sherry Brimer in 2003 on the 29th of April after and 8 year engagement. He knew after one week that they would always be together. He said he was playing for keeps and he was. Kevin loved traveling, bowling, fishing, karaoke, building and fixing things and he loved being a Grumpa. Kevin worked for Zachry Group for over 15 years. He was dedicated to his job and his Zachry family. Kevin left us too soon on the 27th of August, 2021 in Louisiana at the age of 47. He was preceded in death by his grandparents, Floyd and Julie Counts and Douglas and Vera Cheshire. He is survived by his wife, Sherry; son, Raynor Bean and Gwen; daughter, Dana Sessions and husband Jimmy; sister, Vickie Faske and husband Edward and their children, Katelyn and Carter; sister in law, Tanè Felker and husband Van and their children, Evan and Cheyenne. He is also survived by his grandchildren, Madison Gill and Tate Peters, Rylee, Tatum, Bryce, Zoey, Van, Logan, Lily, River, Ryker and Kannon and the great-granddaughter that he couldn’t wait to meet, Georgia Rose Peters. When Kevin was a little boy and his uncle had passed away, he didn’t like the burial and he told his mother, “When you die, I’m going to have you crema-mated and put you on the TV”. So, he too will be cremated and ashes taken to Ireland at a later date. As is the tradition in our family, immediately following the service, there will be a Celebration of Life at the Rocky Road Tavern where everyone is welcome to toast Kevin and celebrate him. Services will be under the direction of Parks Brothers Funeral Home, Okemah, Oklahoma. Online condolences may be made at www.ParksBrothersFuneralHome.com. The family of Kevin would like to encourage those who attend to wear a mask.

A memorial service for Kevin Floyd Counts will be held, Friday, September 10, 2021 at 2:00 PM at the Parks Brothers Funeral Home Chapel in Okemah, Oklahoma. Kevin Floyd Counts was born on the 18th of December in Henryetta, Oklahoma to his loving... View Obituary & Service Information

The family of Kevin Floyd Counts created this Life Tributes page to make it easy to share your memories.

A memorial service for Kevin Floyd Counts will be held, Friday,...

Send flowers to the Counts family.