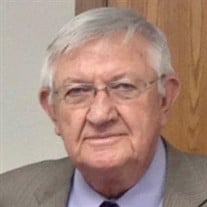 Funeral services for former pastor, L. Frank Young, 83, of Ardmore will be Wednesday morning, October 7, at 11:00 a.m. in the Hilltop Free Will Baptist Church Sanctuary, 4635 West Broadway Street, Ardmore with Reverend Bob Thomas officiating and Reverend Jess Howell assisting. There will also be a funeral service, Thursday, October 8, 2020 at 2:30 PM at the Freewill Baptist Church of Okemah. Interment will follow at the Highland Cemetery in Okemah, Oklahoma. Frank, son of the late John Abe Young and Claudia Fay Young, was born in Marshall, Oklahoma on the 20th day of July 1937. He passed away in the home on the morning of October the 4th surrounded by his family. Frank graduated from Excelsior H.S. in Seminole County. He was a member of the first graduating class of the Free Will Baptist Bible College in Moore, Oklahoma and also a graduate of the Free Will Baptist Bible College in Nashville, Tennessee. He pastored churches in Tennessee and Oklahoma for 58 years. Survivors include his wife of 62 years, Alnita of the home; his daughter Janita Legako and husband Joseph of Lubbock, Texas and grandson Dr. Jerrad Legako and wife Stephanie with great granddaughters June and Jolee, granddaughter Janeal Walker and husband Josh with great grandchildren Emma, Jace and Grayson, and granddaughter Jessica Legako; his daughter Vickie Carden and husband Allen of Foster, Oklahoma and grandson SSG Jacob Young and wife Martha with great grandsons Kaleb and Kaden, grandson Aaron Williamson and wife Elizabeth with great grandsons Preston, Payton and Frankie, granddaughter Alysa Hollingshead and husband Logan, granddaughter Mattie Jones and husband Jason, and great-grandchildren Ryan and Emma, and grandson Brandon Carden; his daughter Juanette Smith and husband Don of Ardmore, Oklahoma and grandson Dylan Smith and wife Carley with great grandson Ledger, grandson Chandler Smith and wife Lesli with great granddaughters Jacelin and Jentri. Along with a number of nieces and nephews. Services in Ardmore are entrusted to Harvey- Douglas Funeral Home. Services in Okemah will be under the direction of Parks Brothers Funeral Home, Okemah, Oklahoma and officiated by Buddy Drake and assisted by David McDougal. Online condolences may be made at www.ParksBrothersFuneralHome.com.

The family of L. Frank Young created this Life Tributes page to make it easy to share your memories.

Send flowers to the Young family.