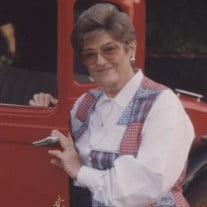 Funeral services for Lena Morgan will be held Friday, February 25, 2022 at 2:00 PM at Parks Brothers Funeral Home Chapel, Wetumka, Oklahoma with Rev. Claude Butler officiating. Lena Morgan was born October 29, 1928 in Rodenbach, Germany to Rudolf Hans Rupprecht and Margarete (Pohl) Rupprecht. She passed away Tuesday, February 15, 2022 in Wilburton, Oklahoma at the age of 93. She is preceded in death by her parents; her husband, Reece Morgan; one son, Kenny Morgan and one brother Eugene Rupprecht. Survivors include her son, Mike Morgan and wife Elaine of Wetumka; her daughter Sandra Freeman and husband Walter of Wilburton; four grandchildren, Kurt Morgan, Patrick Morgan, Tiffany Denny and Jessica Morgan and one great-grand child, Jacob Morgan. Lena met Reece in Germany during WWII while working in an American soup kitchen. After many months of courting, they were married July 4, 1947 in her home country and then on July 5, 1947 on an American ship. Soon following, she and Reece traveled by ship from Germany. After 11 long days at sea, they finally docked in New York City. Lena spoke little to no English when she landed in America. As Reece left her with their baggage in Grand Central Station for four long hours to get train tickets to come to Oklahoma, she recalls being terrified that he had left her in this new, strange place. When he finally returned, tickets in hand, they headed for Oklahoma finally making their home in Wetumka. While Lena never worked outside the home, she was certainly no stranger to hard work. She was an important cog in the wheel as she worked in the fields, milked and fed cattle along with multiple other farming duties all the while being a full-time homemaker and raising their three children. As Lena struggled to find her new American voice, she kept in touch with her German friends and family she left behind through the many, many letters she wrote them. Throughout her long life, she never completely lost her German accent. Lena transitioned into her new world. She became known in the community for the beautiful quilts she made, her cooking, most notedly for her apricot fried pies and sugar cookies. She had a joyous laugh, a heart for her family, had endless advice that only a mother or grandmother could give and always met you with a helping hand. She was a “triathlete”, at least in the eyes of her beloved grand children and never turned down a good game of horse, badminton or frisbee. Lena was a long-time member of the Wetumka First United Methodist Church where she served in many capacities. Lena, lovingly known as Memaw by so many, will not soon be forgotten. Pallbearers will be Kurt Morgan, Jacob Morgan, John Chastain, Clifford Chastain, Tyler Chastain and Billy Conn. Honorary Pallbearers will be Walter Freeman, Larry Denny, Richard Chastain and Travis Beams. Services will be under the direction of Parks Brothers Funeral Home, Wetumka, Oklahoma. Interment will be at Wetumka Cemetery. In lieu of flowers, donations may be made in memory of Lena Morgan to the United Methodist Church Women. Dessert and coffee will follow services at the First Baptist Church of Wetumka. Family and friends are welcome. Online condolences may be made at www.ParksBrothersFuneralHome.com

The family of Lena Morgan created this Life Tributes page to make it easy to share your memories.

Funeral services for Lena Morgan will be held Friday, February...

Send flowers to the Morgan family.