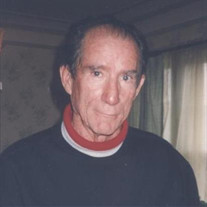 Funeral services for Lenzy Eugene Warrington will be Wednesday, March 6, 2019 at 10:00 AM at the Cromwell First Baptist Church. Interment will follow at the Little Cemetery in Little, Oklahoma. Lenzy Eugene Warrington was born May 14, 1926 in Picher, Oklahoma to Jake and Gracie (Tincup) Warrington. He passed away Saturday, March 2, 2019 at his home in Cromwell, Oklahoma at the age of 92. Mr. Warrington was a resident of the Cromwell area most all of his life. He proudly served his country with the United States Army during World War II and on October 16, 1951 in Huntsville, Arkansas, he married Edith Nash. Mr. Warrington worked as a mechanic and service station owner for many years and enjoyed playing dominoes, bridge and also fishing. He was also a devoted deacon and Sunday school teacher of the Cromwell First Baptist Church for many years. He is preceded in death by his parents; one son, Stanley Warrington; two brothers, Melvin and Robert Warrington and one sister, Violet Webber. Survivors include his wife, Edith Warrington of the home; one daughter, Janis Henley and husband James of Tulsa; one daughter in law, Sally Warrington of Tulsa; two brothers, Carl Warrington and wife Cleo of Cromwell and Virgil Warrington and wife Sharon of Healdton, Oklahoma; four grandchildren, Lenzy Krehbiel-Burton, Jay Nash Krehbiel, Mark Warrington and Patrick Warrington and two great-grandchildren, Addie and James Burton. Serving as active pallbearers will be Jay Nash Krehbiel, Mark Warrington, Patrick Warrington, James Henley, Danny Morgan, Jacob Burton and Edmond Warrington. Honorary bearers will be the Cromwell Frist Baptist Church Sunday School Class. Services will be under the direction of Parks Brothers Funeral Home, Okemah, Oklahoma and officiated by Rev. Manuel Kishketon.

The family of Lenzy Eugene "Gene" Warrington created this Life Tributes page to make it easy to share your memories.

Funeral services for Lenzy Eugene Warrington will be Wednesday,...

Send flowers to the Warrington family.