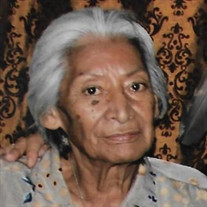 Funeral services for Lettie Mae Randall will be held Saturday, February 19, 2022 at 2:00 PM at the Creek Chapel Methodist Church south of Okemah. Interment will follow at the Creek Chapel Church Cemetery. Wake services will be held Friday, 7:00 PM also at the church. Lettie’s body will arrive at the church at 4:00 PM on Friday. Lettie Mae Harjo was born on April 27, 1941 to Annie Marsey Scott Harjo and Pete Harjo outside of Clearview, Oklahoma. She attended Seneca Indian Boarding School through the 8th grade and later attended Connors State College in Warner, Oklahoma. Mrs. Randall is preceded in death by her husband, Bruce “Bingy” Randall, her brother, Sonny Harjo, her sisters, Helen Jimboy, Minnie Beaver and Lou Ann Wells, her niece Leah Ann Jack and granddaughter, Svnockv Harjo. She is survived by her uncle Turner Scott of Wetumka, brothers, James Harjo of Okemah and Morris Harjo of Clearview, her daughter, Brenda Golden of Okmulgee, son Tim Golden of Okemah, daughter in law, Marnie Frank and son, Mark Golden of Independence, Kansas. Lettie left behind 16 grandchildren and 25 great-grandchildren as well as many beloved nieces, nephews, cousins and extended family. Lettie was a lifelong member of Creek Chapel Methodist Church. She enjoyed singing Mvskoke hymns and attending church services all around Creek Country. Her favorite saying was, “there’s nothing you can’t do if you set your mind to it”. She worked for many years at Dean’s Manufacturing in Okemah and after its closing she started her own business cooking and selling fried meat pies, salt meat and biscuits and wild onions. Lettie grew up harvesting off the land and knew how to find and prepare all kinds of plants and herbs found in the wild. She was known for her traditional cooking and was called upon often to prepare sofke and grape dumplings. Active pallbearers will be Michael Bowers, E.J. Birdcreek, Bryan Birdcreek, Wesley Randall, Leroy Harjo, Ray Jimboy, Eric Harjo and Aries Armstrong. Services will be under the direction of Parks Brothers Funeral Home and officiated by Rev. Edwin Jimboy. Online condolences may be made at www.ParksBrothersFuneralHome.com.

The family of Lettie Mae Randall created this Life Tributes page to make it easy to share your memories.

Funeral services for Lettie Mae Randall will be held Saturday,...

Send flowers to the Randall family.