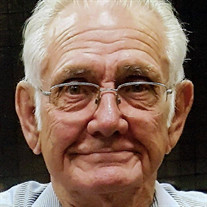 Funeral services for Lloyd L. Raimer will be held Monday, January 20, 2020 at 11:00 AM at the Parks Brothers Funeral Home Chapel in Okemah. Burial will be at the Bennett Cemetery in Warner, Oklahoma Lloyd Lamar Raimer was born July 16, 1941 in Porum, Oklahoma to Vernon Raimer and Edith (Shumate) Morgan. He passed away Thursday, Jan 16, 2020 in Okemah, Oklahoma at the age of 78. Lloyd was a longtime resident of Okemah. He loved Okemah and strived to improve the city by serving on the Okemah City Council for 10 years and also serving as Mayor. He worked many years as an appliance technician and as an evangelist and pastor being of the Full Gospel Faith. On January 15, 1994, in Leflore County, he married Dorothy Ray. Lloyd enjoyed old cars and trucks. He also liked riding motorcycles, going to the lake and visiting with people. Lloyd never met a stranger and will be dearly missed. He is preceded in death by his parents; two sons, Johnny Craig Raimer and Lloyd L. Raimer Jr. who passed away in an accident in 1965. He is survived by his wife, Dorothy Raimer of the home; two sons, Kevin Johnson-Raimer and wife Melissa of Okemah and Lyle Raimer of California; two daughters, Susie Ramilo of Buffalo, Missouri and Railene Watson and husband Chuck of Macomb, Missouri; step son, Roger Taylor and wife Tracy of Muskogee; step daughter, Brandi Ray of Okemah; brother, Phillip Raimer of Roswell, New Mexico; sister, Colenda Brown of Colorado and numerous grandchildren and great-grandchildren. Services will be under the direction of Parks Brothers Funeral Home, Okemah, Oklahoma and officiated by Bro. Delbert Hawpe. Online condolences may be made at www.ParksBrothersFuneralHome.com.

Funeral services for Lloyd L. Raimer will be held Monday, January 20, 2020 at 11:00 AM at the Parks Brothers Funeral Home Chapel in Okemah. Burial will be at the Bennett Cemetery in Warner, Oklahoma Lloyd Lamar Raimer was born July 16, 1941... View Obituary & Service Information

The family of Lloyd L. Raimer created this Life Tributes page to make it easy to share your memories.

Send flowers to the Raimer family.