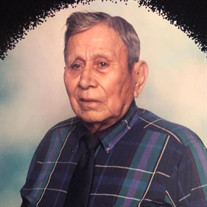 Funeral Services for Lon Bear will be held Wednesday, March 3, 2021 at 10:00AM, at Parks Brothers Funeral Home Chapel in Okemah, Ok. Interment will follow at the Montesoma Cemetery in Okemah, Ok. Lon Bear “aka” Midge or Major was born on November 8, 1930 in Okfuskee Co. to Lonie and Annie Coker Bear. He made his journey home to be with the Lord on February 27, 2021 at his home. Lon is of the Beaver clan and his tribal town is New Tulsa. Lon resided most of his life in Okfuskee county. That is where he met and married Susanna Deeringwater in 1956. Later they moved to Arizona where they had 7 of 8 children. Then in 1970 they moved back to Oklahoma where they welcomed their 8th child. Lon loved to hunt, fish and work on vehicles. Also, he loved to sit and talk to people about how he grew up and loved sharing his memories. He spent over half of his life working as a Brick Mason, and enjoyed his work bricking homes and chimneys. He also talked of working with a logging crew in Washington. Having visitors really made his day. Thank you, Denny Fox, and Loper Jones. Lon is preceded in death by both parents, Lonie and Annie Coker Bear, 5 brothers, Lucky, Albert, Clifford, Ashly and Atley Bear. 2 sisters, Stella Bear Mueller and Patricia Bear Noon. 2 sons, Lon Bear Jr., Henry Michael Bear and daughter, Dana Sue Bear. He is survived by 2 sons, Dale and wife Janet Bear of Nowata, Ok., Gaylan and wife Le’onna Bear of Okemah, Ok., 3 daughters, Lonetta and husband James Fisher of Glenpool, Ok., Mary and husband Mark Billie of Okemah, Ok., and Diana Bear Baker of Okemah, Ok. Lon has 12 grandchildren, 26 great grandchildren, one on the way, and a host of nieces and nephews. Pallbearers are Dayne Bear- Billie, Dakota Bear, Mark Billie, James Fisher, Raymond Barnett and Daniel Bear. Honorary Pallbearers are Tayton Bear- Osceola, Denny Fox, Gary Deeringwater and Loper Jones. Services will be under the direction of Parks Brothers Funeral Home, Okemah, Oklahoma. Online condolences may be made at www.ParksBrothersFuneralHome.com.

Funeral Services for Lon Bear will be held Wednesday, March 3, 2021 at 10:00AM, at Parks Brothers Funeral Home Chapel in Okemah, Ok. Interment will follow at the Montesoma Cemetery in Okemah, Ok. Lon Bear &#8220;aka&#8221; Midge or Major was... View Obituary & Service Information

The family of Lon Bear created this Life Tributes page to make it easy to share your memories.

Funeral Services for Lon Bear will be held Wednesday, March 3,...

Send flowers to the Bear family.