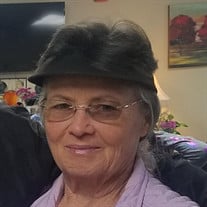 Lou Anna (Williams) Fuller was born on January 5. 1941, and gained her angel wings on Thursday, June 24, 2021. She was 80 years old. Lou Anna was the daughter of Calvin and Velena Carpenter, of Cromwell. She had a loving, caring nature that she developed at an early age as she was the oldest of 8 children. She graduated in 1959 from Excelsior High School. Lou Anna married the love of her life, Wendell Fuller, on April 23, 1960, and they resided in Cromwell. From this union, 3 children were born: Jerri, Terry, and Jo Anna. In 1970, they bought land and started a cattle ranching operation. Lou Anna was a homemaker, but she also worked right beside her husband baling hay, feeding cows, and tending to other chores around the farm. She is known for her home-cooked meals, kind, loving words, and “Granny’s School”, where she taught all the grandbabies and one great-grandbaby before they were old enough to go to big kid school. Wendell and Lou Anna hosted the Fuller Family Reunion at the lake on their farm for 30 years. Over a hundred family members from several states would gather under the trees on the last full weekend in June every year to camp, eat, sing, and play softball. When it was time to go, Wendell and Lou Anna would wave goodbye until the last car disappeared. Lou Anna’s greatest source of pride and joy was her children and grandchildren. She loved attending their parties, programs, and ballgames, and was present at nearly every event. She was affectionately called “Granny” by many and loved by all. She always gave unselfishly. If you stopped in for a visit, you would never leave hungry or without a hug. Lou Anna enjoyed mowing, reading, and gardening. She also loved feeding the hummingbirds, raising peacocks, and watching the geese and swans on the lake from the front porch. Her favorite color was purple. Lou Anna was preceded in death by her infant son, Wendell Terry Fuller, her father Calvin Carpenter, and son in law Greg Parker. She is survived by her husband of 61 years, daughter Jerri Parker and friend Tim Givens; daughter Jo Anna Benson and husband, Joe; granddaughter Tabitha Green and Paul Freeman; grandson Kevan Parker and wife Cortney, grandson Stevan Parker and wife Tina; grandson Bradly Borges and Amanda Rusco; granddaughter Laura McCluney and husband Ryan; granddaughter Kailyn Davis and husband Zach; and grandson Calvan Parker. Also, great-grandchildren Kellen Green, Ricci Parker, Chance Green, Maddox Parker, Swayze Davis, Lincoln Davis, and Lily McCluney. She is also survived by her mother, Velena Carpenter, and siblings Lois Rogers, RA Williams, Jean Marquis, Carolyn Sue Morningstar, Aliene Turner, Rick Carpenter, and Coy Carpenter, as well as a multitude of nieces and nephews. Pallbearers will be Kevan, Stevan, and Calvan Parker, Bradley Borges, and Kellen and Chance Green. Honorary Pallbearers will be Maddox Parker, and Swayze and Lincoln Davis. Burial will follow at Highland Cemetery in Okemah, where she will rest alongside her infant son. Services will be held Thursday, July 1 at 2 pm at the Okemah Church of Christ, under the direction of Parks Funeral Home. Officiated by Paul Dowell and assisted by Kent Dowell. Online condolences may be made at www.ParksBrothersFuneralHome.com

Lou Anna (Williams) Fuller was born on January 5. 1941, and gained her angel wings on Thursday, June 24, 2021. She was 80 years old. Lou Anna was the daughter of Calvin and Velena Carpenter, of Cromwell. She had a loving, caring nature that... View Obituary & Service Information

The family of Lou Anna Fuller created this Life Tributes page to make it easy to share your memories.

Send flowers to the Fuller family.