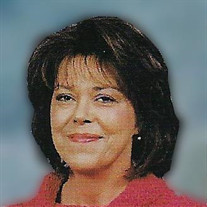 Marsha Ann (Holman) VanHooser was born in Okemah, Oklahoma on August 27, 1948, to Ray and Mary Alice Holman and passed away on November 6, 2020, in Oklahoma City. Marsha was a lifelong resident of Okemah. She graduated from Okemah High School in 1966 and went on to receive her bachelor’s degree in elementary education from East Central University in 1970. While at East Central, she pledged Chi Omega sorority and also met and married her husband, Vance VanHooser, on May 8, 1970, just a few days before graduation. Marsha and Vance celebrated their 50th wedding anniversary earlier this year. Growing up as the daughter of the FFA teacher, Marsha participated in 4-H as a young girl and raised and showed Poland China pigs. She even won overall Grand Champion at the State Fair in Oklahoma City, and to no one’s surprise, the picture of her posing with her Grand Champion pig shows Marsha with her always perfectly painted fingernails! In high school, Marsha was chosen by her Sophomore class for homecoming queen candidate; attended Girls State and was elected state representative; competed in Interscholastics meet in typing and shorthand, and also accompanied many of her classmates on the piano at singing competitions. Marsha’s first teaching job was at Castle, but she spent most of her long teaching career at Oakes Elementary in Okemah. She loved her students and they loved her. She was a patient, kind and encouraging teacher. Those very same characteristics also made her a wonderful mother to Vance and Marsha’s daughter, Kim. Kim and Marsha were as much best friends as they were mother and daughter. She was always there to listen, provide support, keep a secret, and give good advice. After Kim’s son, Taylor, was born, Marsha became known in the family as “Mimi,” and there was nothing she enjoyed more than being Taylor’s grandmother Marsha was an avid reader, loved gardening, and was a huge Thunder and OU basketball and football fan. But most of all, she was the kindest, most loving wife, mother, grandmother, daughter, and sister her family could ever have wanted. Marsha was preceded in death by her parents and a grandson, Matthew Ryan Fajt. She is survived by her husband Vance of the home, her daughter Kim Fajt and fiance Bill Nunnery of Norman, her grandson Taylor Fajt of Oklahoma City, and her sister and brother-in-law Leslie and Del Lemon of Austin, Texas. In lieu of flowers, contributions in Marsha’s memory can be made to the Okfuskee County Library, 301 S. 2nd, Okemah, Ok 74859; the Okemah Public School Foundation, P.O. Box 65, Okemah, OK 74859; or other program supporting the Okemah community. Private graveside services will be held at Highland Cemetery in Okemah, Oklahoma. Services will be under the direction of Parks Brothers Funeral Home, Okemah, Oklahoma.

Marsha Ann (Holman) VanHooser was born in Okemah, Oklahoma on August 27, 1948, to Ray and Mary Alice Holman and passed away on November 6, 2020, in Oklahoma City. Marsha was a lifelong resident of Okemah. She graduated from Okemah High School... View Obituary & Service Information

The family of Marsha Ann VanHooser created this Life Tributes page to make it easy to share your memories.

Marsha Ann (Holman) VanHooser was born in Okemah, Oklahoma on...

Send flowers to the VanHooser family.