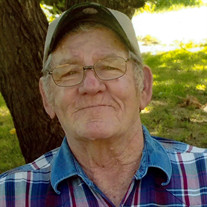 Graveside services for Marvin Eugene “Bozie” Tillery, Sr. will be held Thursday, May 21, 2020 at 10:00 AM at the Rock Creek Cemetery in Okemah. Marvin Eugene Tilley Sr., also known as “Bozie”, was born August 3, 1941 in Okemah, Oklahoma to Clarence and Beulah (Wells) Tillery. He passed from this life on Monday, May 18, 2020 in Okemah, Oklahoma at the age of 78. Marvin was married to Elizabeth Dodson in 1960 and from this union six children were born. He was a heavy equipment operator for many years and later worked for Rural Water District 2 until his health forced him to retire in 2003. He loved hunting, camping, gardening, riding horses, playing cards and dice with family and friends; but fishing was his favorite thing to do. Marvin also loved cooking and spending time with family. He is preceded in death by one daughter, Marlene Rachelle Tillery; his parents, Clarence and Beulah Tillery; seven sisters, Ruby Fuller, Betsie McCormick, Donna Sue Tillery, Betty Smith, Delois Smith, Freda Hussein and Opal Smith and three brothers, Melvin “Buster” Tillery, Johnny Tillery and Leon Tillery. Survivors include five children, Steven Tillery and wife Terri of Okemah, Rodney Tillery of Holdenville, Tammy Ragsdale and husband Todd of Okemah, Marvin Eugene Tillery Jr. and wife Gail of Okemah and Rashawn Rodgers and husband Kyle of Seminole; 13 grandchildren and 23 great-grandchildren. He is also survived by two sisters, Gladys Bennett and Kathryn Dennis and husband Ed of Okemah and one brother, Donnie Tillery and wife Elaine of Okemah along with many nieces, nephews and friends. Serving as pallbearers will be Steven Ray Tillery, Chandler Ragsdale, Brennon Duke, Dewayne Smith, Billy “Sug” Smith and Jerry Don Smith. Services will be under the direction of Parks Brothers Funeral Home and officiated by Bro. Roy Lee Wilbourn. The family has requested that only the immediate family gather under or near the cemetery tent to safely practice social distancing at the cemetery. Online condolences may be made at www.ParksBrothersFuneralHome.com.

The family of Marvin Eugene "Bozie" Tillery Sr. created this Life Tributes page to make it easy to share your memories.

Send flowers to the Tillery family.