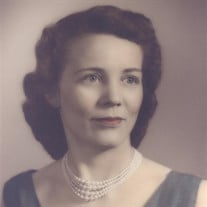 Funeral services for Mary Domeda Musgrove will be held Wednesday, June 6, 2018 at 10:00 AM at the Parks Brothers Funeral Home Chapel in Okemah. Interment will follow at the Highland Cemetery in Okemah. Mary Domeda Musgrove was born August 31, 1926 in Okfuskee County, Oklahoma to Dewey Clifton Earnest and Margie Belle (Coslet) Earnest. She passed away Sunday, June 3, 2018 in Okemah, Oklahoma at the age of 91. Mrs. Musgrove was a lifelong resident of Okfuskee County. She and James Marvin Musgrove were married August 31, 1943 in Wewoka, Oklahoma; he later preceded her in death, December 13, 2007. Mrs. Musgrove was a rancher who had previously worked with Southwestern Bell and at Dean’s Manufacturing in Okemah. She truly enjoyed ranching and also her dog and cat. Also preceding her in death were her parents and five brothers. Survivors include three brothers, Buddy Earnest and wife Gloria of Okemah, Dois Earnest and wife Clara of Beggs and Doil Earnest and wife Betty of Tulsa; five sisters, Linda Orr of Okemah, Peggy Kinsey of Okemah, Sally McElyea and husband Jim of Tulsa, Lois Garrison and husband Ray of Okmulgee and Darlene Welfel and husband Morris of John Day, Oregon. She is also survived by a nephew, Rick Orr and wife Tasha of Okemah and many more nieces, nephews and extended family. Serving as pallbearers will be Rick Orr, Brian Orr, Keith Garrison, Gary Baker, Ronnie Earnest and Chas Orr. Services will be under the direction of Parks Brothers Funeral Home, Okemah, Oklahoma and officiated by Frank Earnest.

The family of Mary Domeda Musgrove created this Life Tributes page to make it easy to share your memories.

Funeral services for Mary Domeda Musgrove will be held Wednesday,...

Send flowers to the Musgrove family.