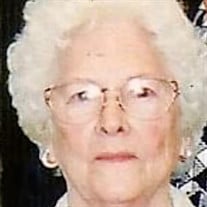 Graveside services for Melba Jean Mansfield, Wetumka resident, will be held Saturday, January 29, 2022 at 2:00 PM at the Wetumka Cemetery in Wetumka, Oklahoma with Vernon Cooley officiating. Melba Jean Mansfield was born January 11, 1927, in Earlsboro, Oklahoma to Leo L. and Elsie Mae (Warner) Rhinehart. She passed away Monday, January 24, 2022 in Okemah, Oklahoma at the age of 95. At age 9, she and her family moved to California where she resided until moving to Wetumka, Oklahoma in 1975. On November 6, 1943, in Fresno, California, she married Raymond Neal Mansfield. After graduating from Nursing School in Fresno with her LPN License; she began a long career of nursing before retiring in the early 90’s. She enjoyed gardening and working with her flowers as well as shopping and taking care of her family. She was also a longtime member of the First Assembly of God Church of Wetumka. She is preceded in death by her husband, Raymond; her parents, Leo and Elsie Mae Rhinehart; her step father, John Lester; four brothers, Kenneth, Bob, Leo and Billy Rhinehart; one half sister, Nadine and a son in law, Leon Sigler. Survivors include her son, Robert Mansfield of Wetumka; three daughters, Karen Sigler of Wetumka, Diana Roberts and husband Larry of Wetumka and Lisa Mitchell and husband Mike of Checotah; 10 grandchildren, Tammie Goodwin and husband Kevin, Sheila Goodwin and husband Kyle, Hollie Mansfield, Ryan Roberts and wife Tracy, Lee Ann Adams and husband Richy, Brandie Parker and husband John, Jonathan Roberts and wife Brandie, Shandon Madden, Megan Bible and husband Josh and Lacy Selvidge and husband Nick; 25 great-grandchildren and a numerous great-great-grandchildren. Services will be under the direction of Parks Brothers Funeral Home, Wetumka, Oklahoma. Online condolences may be made at www.ParksBrothersFuneralHome.com.

The family of Melba Jean Mansfield created this Life Tributes page to make it easy to share your memories.

Send flowers to the Mansfield family.