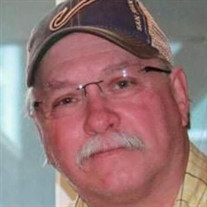 Funeral services for Michael W. Brown, Weleetka resident, will be held Friday, February 18, 2022 at 2:00 PM at the Parks Brothers Funeral Home Chapel in Okemah. Interment will follow at the Weleetka Cemetery. Michael W. Brown was born January 2, 1958 in Washington D.C. He passed away Tuesday, February 15, 2022 at his home in Weleetka at the age of 64. Mike worked as an auto parts salesman for over 40 years and was a graduate of Moore High School. As a child, growing up in the Baltimore, Maryland area, his father instilled the loved of sports and especially the Baltimore Orioles and Baltimore Colts. On September 26, 1997, in Las Vegas, Nevada, he married Deena Crawley. Mike was also a music buff and loved old rock and roll and especially the band KISS. As he got older he enjoyed reading and watching and feeding birds. He loved his two cocker spaniel dogs who already miss him. Mike loved living in Weleetka and his family. He will be dearly missed. He is preceded in death by his parents; one sister, Mona and two grandchildren, Elizabeth and Michael. He is survived by his wife, Deena Brown of the home; three daughters, Amanda Lowry and husband Scott of Oklahoma City, Brandy Lofstrom and husband Jeremy of Broken Arrow and Whitney Brown of Broken Arrow; two brothers, Allan and Bill; two sisters, Nena and Joyce; seven grandchildren, Kimberly, Jessica, Autumn and Justin Bostwick, Samantha Lofstrom, Cambri Brown and Andrew Lofstrom. Serving as active pallbearers will be Jeremy Lofstrom, Kevin Crawley, Braden Crawley, Wendell Crawley, Bob Crawley and Justin Bostwick Honorary bearers include Chris Allenbaugh, Scott Lowry, Dale Pendley, Wendell Whitlow, Michael Smith, Jerry Cooper, Garland Pennington and Brylen Riker. Services will be under the direction of Parks Brothers Funeral Home and officiated by Haden Dunn. Online condolences may be made at www.ParksBrothersFuneralHome.com.

The family of Michael W. Brown created this Life Tributes page to make it easy to share your memories.

Send flowers to the Brown family.