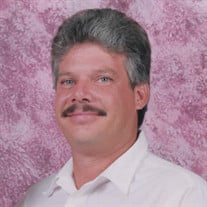 Funeral services for Michael Dee “Spanky” Pack will be held Friday, December 17, 2021 at 2:00 PM at the Parks Brothers Funeral Home Chapel in Wetumka, Oklahoma. Interment will follow at the Wetumka Cemetery. Michael Dee Pack, known as “Spanky”, was born January 9, 1958 to Dee and Colena (Skipworth) Pack. He passed away Tuesday, December 7, 2021 in Wetumka, Oklahoma at the age of 63. Mr. Pack was a lifelong resident of Wetumka and a 1976 graduate of Wetumka High School. On June 5, 1976, in Little, Oklahoma, he married Darrellyn D. Seeley; she later preceded him in death on May 30, 2021. Mr. Pack worked in the oilfields most of his life and enjoyed the outdoors. He loved to hunt, fish, gardening, going to the mountains, taking care of his chickens and feeding and watching wildlife. He will be dearly missed. Also preceding him in death was his daughter, Jamie Lynn Pack; one son, Jacob Israel Pack and a half-brother, Delayne Pack. He is survived by his parents; Dee and Colena Pack of Wetumka; two sons, Michael Pack and wife Kylie of Wetumka and Joshua Pack and wife Ashley of Bayfield, Colorado; his daughter, Sharon Tyler and husband Billy Ray Guinn of Wetumka; 14 grandchildren, Jozeph Pack, Blake Tyler, Makala Johnson Pack, Jaxson Pack, Avery Tyler, Jayden Pack, Jace Pack, Olivia Guinn, Daxton Pack, Kimberlynn Pack, Isabella Husband, Kaden Husband, Khole Husband and Sissy along with two great-grandchildren, Sophia and Jettson Pack. Services will be under the direction of Parks Brothers Funeral Home, Wetumka, Oklahoma and officiated by Doyle Seeley. Online condolences may be made at www.ParksBrothersFuneralHome.com.

The family of Michael Dee "Spanky" Pack created this Life Tributes page to make it easy to share your memories.