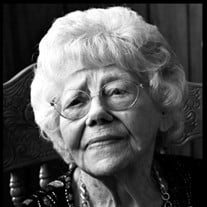 Norma Violet (Wharncliffe) Russell was born March 18th, 1923 in Chicago, IL to William (Bill) and Violet Wharncliffe. She passed from this earth on November 5, 2020 at her home in Shawnee, OK Bill was a brick mason and his work required the family to move often. Consequently, Norma called many places home including New York, Pennsylvania, Kentucky, Georgia, and finally settling in Nashville, TN where she finished high school at West End High. She continued her education at Peabody College and worked for Bell Telephone during World War II. In 1945 she married Eddy Russell and moved to Yukon, OK where she adjusted from 100% city-girl to farm-wife. She tended to the family farm and impressed the local wives with her cooking skills, cooking massive amounts of food for the harvesters, which won over other wives and community members. In 1954 the family moved to a ranch near Okemah, OK where Norma continued to help with the farming and ranching. In 1966 she began her career at the Dept. of Human Services in Seminole County. Her beloved husband, Eddy, passed away in 1982 and in 1985 Norma retired from DHS, promptly built a swimming pool, and began a new life traveling with her friends and sharing time with her family. Norma’s cooking skills were known far and wide. She was known to take whatever was left in the pantry and a whip up a gourmet meal. She baked cookies for all of the kids’ bake sales, for all the neighbors at Christmas, and for any and all family gatherings. Her cookie baking fame eventually spawned “Norma’s Country Kitchen” cookie business. She baked cookies for weddings, political events, and family reunions all over the area. Literally thousands of cookies were baked in her farm kitchen for many years. Norma was a very giving mother, grandmother, great grandmother, and friend. Her children were always bringing friends in to the house. The friends sometimes learned the meal routine and would magically show up at dinner time, and knew there would be an extra plate set just for them. Many would go out of there way to stop and check for a fresh batch of chocolate chip cookies and a cup of coffee. The joy of giving was not lost on Norma, it was most likely the secret to her long life. Norma loved music and loved to dance. During her teen years she danced at the famed Ryman Auditorium in Nashville and the love of dancing carried through her life. She traveled many miles following Keith, Tim, and Shawna in their music career, traveling nationwide to hear them play, dance to their music, and show support. Even at 97 years old, she would occasionally two step around the house on her walker singing Silver Wings. Norma lived a long and enviable life. Although she, as most do, faced many losses, hardships, and hard times, she was an optimist who believed the best was yet to come. She was an inspiration to many… her family, her friends, and community …. She was the personification of “The Golden Rule” and lived it every day. The world has lost a remarkable, strong, and loving person… She would want all of you to follow her example and “Do unto others as you would have them do unto you” ….. Norma was preceded in death by her parents Bill and Violet Wharncliffe, and her husband, Eddy Russell. She is survived by her children Gayle Warrington, Keith Russell and Tim Russell and their children and grandchildren. Services will be Monday, November 9, 2020 at 10:00 AM at the Parks Brothers Funeral Home Chapel in Okemah. Graveside services will also be Monday at 2:00 PM at the Frisco Cemetery in Yukon, Oklahoma. Online condolences may be made at www.ParksBrothersFuneralHome.com. In lieu of flowers, donations may be made with the Westview Boy’s Home, PO Box 551, Hollis, OK 73550-9901 or St. Jude’s Research Hospital, 501 St. Jude Pl., Memphis, TN 38105. Services will be under the direction of Parks Brothers Funeral Home, Okemah, Oklahoma and officiated by Pastor Doug Hauenstein.

Norma Violet (Wharncliffe) Russell was born March 18th, 1923 in Chicago, IL to William (Bill) and Violet Wharncliffe. She passed from this earth on November 5, 2020 at her home in Shawnee, OK Bill was a brick mason and his work required the... View Obituary & Service Information

The family of Norma Violet Russell created this Life Tributes page to make it easy to share your memories.

Send flowers to the Russell family.