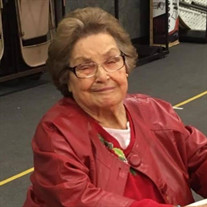 Funeral services for Obie Ineta (May) Osborn will be held Tuesday, September 28, 2021 at 2:00 PM at the Assembly of God Church of Wetumka. Interment will follow at the Wetumka Cemetery. Obie Ineta (May) Osborn was born August 31, 1934 in Wetumka, Oklahoma to Buster and Flossie May. She left this world on Friday, September 24, 2021 in Okemah, Oklahoma at the age of 87. On May 15, 1952, in Holdenville, Oklahoma, she was united in marriage to Cassol Osborn; he later preceded her in death in 2003. To this union, four children were born: Brenda, Marsha, Randy and Jeff. Obie was a lifelong member of the Church of Christ. She loved going to garage sales and taking care of her house plants. She was known for her cooking and worked as a school cook in the Wetumka Schools for many years. Obie was the oldest of nine sisters and also had three brothers. She always loved going on her “Sister Trips” where she shared many special times with them. Cass and Obie had a unique bond with Charlie and Shirley Osborn, because two brothers married two sisters, because of this the families grew up together. Obie loved being with all her grandkids and family. She had nine grandkids, twenty two great-grandkids and four great-great-grandkids. She leaves behind five sisters, one brother, many cousins and family and friends. She is also survived by her daughter, Brenda Morgan and husband David and sons, Randy and wife Susie Osborn and Jeff and wife Thomasene Osborn all of Wetumka. Also preceding her in death was her daughter, Marsha Clapp; grandson, Cameron Osborn and great-granddaughter, Lilly Clapp who all welcomed her home in Heaven. Serving as pallbearers will be Philip Osborn, Matt Osborn, Dean Murphy, Billy West, David Mize, Brent McGee and Jerry Putman. Services will be under the direction of Parks Brothers Funeral Home, Wetumka, Oklahoma and officiated by Pastor and Curt Bellinger.

The family of Obie Ineta Osborn created this Life Tributes page to make it easy to share your memories.

Funeral services for Obie Ineta (May) Osborn will be held Tuesday,...

Send flowers to the Osborn family.