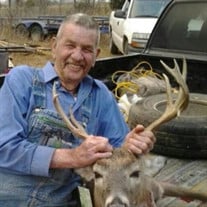 Funeral services for Paul Talman Dodson, Sr. will be held Tuesday, June 22, 2021 at 2:00 PM at the Parks Brothers Funeral Home Chapel in Okemah. Interment will follow at the Rock Creek Cemetery south of Okemah. Paul Talman Dodson, Sr. was born January 5, 1936 in the Banner Community of Okfuskee County to Ora and Ellen (Creekpaum) Dodson. He passed away Thursday, June 17, 2021 at his home in Okemah at the age of 85. Paul was a lifelong resident of Okfuskee County. He and Hannah Fisher were married October 10, 1956 in Okemah. Paul worked many years in the oilfields and also as a minister and had a passion for preaching. He enjoyed hunting, fishing, being outdoors and most of all spending time with his family. He also enjoyed making knives and was known for selling watermelons in Okemah. Paul was strong in his faith and will be dearly missed. He is preceded in death by his parents; his wife, Hannah Dodson; four sisters, Dorothy, Golda, Lyda and Priscilla; one brother, Wesley and one great-grandchild. Survivors include his three sons, Mikey Dale Dodson and wife Kori of Okemah, Paul Talman Dodson Jr. of Okemah and Mark Kevin Dodson and wife Patti of Bearden; three daughters, Paula Sue Clark and husband Chris of Okemah, Teresa Ann Turbeville and husband Gary of Okemah and Karen Lorraine Dodson of Shawnee; two brothers, Eugene Dodson and wife Juanita of Wetumka and Sam Dodson and wife Louise of Castle; four sisters, Phebe Marie Henry of Schulter, Oklahoma, Elizabeth Hollingsworth and husband Bob of Okemah, Mary Devine of Schulter and Edith Allene Wilbourn and husband Roy of Dewar, Oklahoma; 16 grandchildren and 30 great-grandchildren. Serving as pallbearers will be Kevin Dodson, Mikey Dodson, Trey Dodson, Christopher Clark, Darrein Dodson and Jaiden Ferry. Services will be under the direction of Parks Brothers Funeral Home, Okemah, Oklahoma and officiated by Chaplain Tommy Azlin. Online condolences may be made at www.ParksBrothersFuneralHome.com. .

The family of Paul Talman Dodson Sr. created this Life Tributes page to make it easy to share your memories.

Send flowers to the Dodson family.