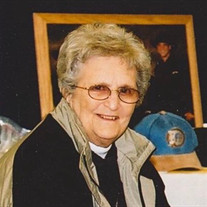 Funeral services for Peggy Jo Fifer will be held Saturday, December 14, 2019 at 3:00 PM at the Parks Brothers Funeral Home Chapel in Okemah with Mike Fletcher officiating. Viewing will be held Saturday, 12:00 PM – 2:00 PM. Peggy Jo Fifer was born January 8, 1932 in Meeker, Oklahoma to James Robert Green and Lola Mae (Yarbrough) Green. She passed away Tuesday, December 10, 2019 at her home in Broken Arrow, Oklahoma at the age of 87. Peggy was a longtime resident of the Okemah area and was a 1949 graduate of Okemah High School. She also lived in Collinsville, Oklahoma for more than 30 years and in Pauls Valley, Oklahoma for over 10 years. She and Earl Fifer were married August 12, 1950; he later preceded her in death December 19, 1991. Peggy worked many years as a rodeo secretary. She was a member of the IPRA since 1958 and had received several awards. In 1995 she was the “spokeswoman of the year” and in 1998 the “most deserving old timer”. She enjoyed later years with her classmates from the Okemah High School class of 1949. She served as rodeo secretary throughout the Eastern and Southeastern United States including the IFR a record 10 times, being selected by the top 15 cowboys in the nation in each event. She was also a Gold Card member of the IPRA, lifetime member of the Okemah Alumni Association and organist with the Skyview Baptist Church of Okemah. She is preceded in death by her parents; one sister, Betty Shipman and son in law, Bill Rhodes. Survivors include her two daughters, Wauthena Jo Rhodes of Broken Arrow and Earlene Barlow also of Broken Arrow; one sister, Ann Mulliniks of Okemah; three grandchildren, Travis Barlow, Heath Boutwell and Nick Boutwell and 10 great-grandchildren. Serving as honorary pallbearers will be: Mike Rice, Walt Sumner, Terry Williams, Milburn Outhier, Lane Barber, Mike McCary, Robbie Rogers, Jet McCoy, Cord McCoy, Benny Jordan, Jim Williams, Leon Frakes, Vernon Williams, Red Duffin, Dan Dailey, Ronnie Williams, Jerry Belles, Ron Hunter, Nancy Finley, Butch Stewart, Marilyn Jones, Jeanne Belles, Dale Yerrigan, Clarence LeBlanc, Phil Sumner, Joe Ward, Raymond Morrison, Wendell Ratchford and Mike Johnson. Services will be under the direction of Parks Brothers Funeral Home of Okemah, Oklahoma. In lieu of flowers, donations may be made to the Alzheimer’s Association. Online condolences may be made at www.ParksBrothersFuneralHome.com.

The family of Peggy Jo Fifer created this Life Tributes page to make it easy to share your memories.

Send flowers to the Fifer family.