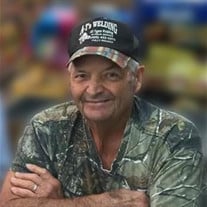 Funeral services for Phillip Lois Parker will be held Wednesday, June 13, 2018 at 10:00 AM at the First Assembly of God Church in Wetumka, Oklahoma. Interment will follow at the Wetumka Cemetery with military honors. Phillip Lois Parker was born September 24, 1944 in Wetumka, Oklahoma to Nin Herman Parker and Maggie Elizabeth (Jones) Parker. He passed away Sunday, June 10, 2018 in Oklahoma City, Oklahoma at the age of 73. Phillip was a lifelong resident of the Wetumka area and graduate of Wetumka High School. He and Latrelle Johnson were married April 23, 1964 in Wetumka. Phillip was a patriotic man and proud American who served his country with the United States Army during the Vietnam War. He worked as a heavy equipment operator and foreman in pipeline construction from 1963 – 2002. He also enjoyed gardening, fishing, hunting and wood working. He was truly a jack of all trades that could fix or do just about anything. Phillip was a strong hardworking good man that was very generous to not only his family but with his friends also. He was dearly loved by many friends and family that will miss him greatly. He was also a member of the Living Water Pentecostal Holiness Church of Wetumka. He is preceded in death by his parents; three brothers, James W. Parker, Kenneth L. Parker and Harless Parker and four sisters, Jane Tinkler, Lou Hubbard, Ruth Hooker and Willene Sutterfield. Survivors include his wife, Latrelle Parker of the home in Wetumka; one son, Darrin Phillip Parker and wife Rachel Rene of Pea Ridge, Arkansas; one daughter, Melissa Dawn Sorrell and husband Jonathan of Wetumka; two brothers, David N. Parker and wife Carolyn of Wetumka and Rickey J. Parker of Wetumka and four grandchildren, Amanda Ziese of Kansas City, Parker J. Sorrell of Wetumka, Maggie E Parker of Pea Ridge and Braelyn Sorrell of Wetumka. Serving as pallbearers will be John Parker, Richard Parker, Jacob Parker, Ethan Parker, Jonathon Parker and Josh Parker. Honorary bearers include Bruce Sutterfield, Jeff Parker, Charles Allred, John Chastain, James Eastep, Steve Wagner and Alan Tillery. Services will be under the direction of Parks Brothers Funeral Home, Okemah, Oklahoma and officiated by Rev. Renee Ross and assisted by Rev. Bill Harris and Rev. Brad Burton.

Funeral services for Phillip Lois Parker will be held Wednesday, June 13, 2018 at 10:00 AM at the First Assembly of God Church in Wetumka, Oklahoma. Interment will follow at the Wetumka Cemetery with military honors. Phillip Lois Parker was... View Obituary & Service Information

The family of Phillip L. Parker created this Life Tributes page to make it easy to share your memories.

Funeral services for Phillip Lois Parker will be held Wednesday,...

Send flowers to the Parker family.