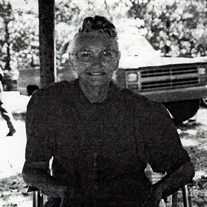 Funeral services for Priscilla Christeen Henshaw will be held Friday, May 28, 2021 at 2:00 PM at the United Pentecostal Church of Okemah. Interment will follow at the Highland Cemetery in Okemah. Priscilla Christeen (Dodson) Henshaw was born March 3, 1928 in the Banner Community to Ora and Ellen (Creekpaum) Dodson. She was the third out of 12 children. Priscilla grew up in the Banner community and attended Banner Schools. On July 24, 1948, she married the love of her life, Cecil Henshaw in Okmulgee. They were married 45 years when he preceded her in death on May 31, 1994. Priscilla enjoyed working in her garden and flowers. She loved spending time with her family and friends including fur babies. Most of all, she lived for church and worshiping her Lord. She attended the Freewill Baptist Church of Okemah. She is preceded in death by her parents; her husband; one grandson, Tim Henshaw; one son in law, Larry Holder; three sisters, Dorothy, Golda and Lyda; one brother, Wesley and numerous other family members. Survivors include her son, Ora Lee and Louise Henshaw of Okemah; two daughters, Judy Holder of Maud and Jacquetta Henshaw of Okemah; one grandson, Christopher Henshaw Sr. of Helena; one granddaughter, Kathy and Jay Partin of Okemah; one great-granddaughter, Morgan Henshaw and fiancée Austin Billings of Castle; two great-grandsons, Christopher Henshaw Jr and Cecil Henshaw of Okemah; four sisters, Phebe Marie Henry of Schulter, Elizabeth and Bob Hollingsworth of Okemah, Mary Devine of Henryetta and Edith Allene and Roy L. Wilbourn of Dewar; three brothers, Eugene and Juanita Dodson of Wetumka, Paul Dodson Sr. of Okemah and Sam and Louise Dodson of Castle. She is also survived by numerous nephews, nieces and cousins by the dozen. Pallbearers will be James Rosson, Wesley Rosson, Jim Heskett, Christopher Henshaw Jr. Cecil Henshaw and Jay Partin. Services will be under the direction of Parks Brothers Funeral Home, Okemah, Oklahoma and officiated by Bro. Jamie Perry. Online condolences may be made at www.ParksBrothersFuneralHome.com.

Funeral services for Priscilla Christeen Henshaw will be held Friday, May 28, 2021 at 2:00 PM at the United Pentecostal Church of Okemah. Interment will follow at the Highland Cemetery in Okemah. Priscilla Christeen (Dodson) Henshaw was born... View Obituary & Service Information

The family of Priscilla Christeen Henshaw created this Life Tributes page to make it easy to share your memories.

Funeral services for Priscilla Christeen Henshaw will be held...

Send flowers to the Henshaw family.