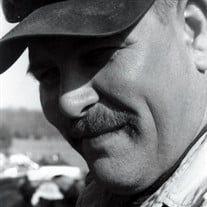 Funeral services for Randy J. “Boomer” Kenneda will be held Thursday, September 19, 2019 at 2:00 PM at the Parks Brothers Funeral Home Chapel in Okemah. Interment will follow at the Morse Cemetery in Okemah. Randy J. “Boomer” Kenneda was born January 26, 1963 in Okemah, Oklahoma to Earl L. Kenneda and Jesse Evelyn (Connell) Kenneda. He passed away Saturday, September 14, 2019 in Tulsa, Oklahoma at the age of 56. Boomer was a lifelong resident of the Okemah area and a 1981 graduate of Mason High School. He worked many years in the oilfields and farming and ranching. He also enjoyed fishing the Deep Fork River. He is preceded in death by his parents; one brother, Robert E. “Catfish” Kenneda; one sister, Linda Graham and a nephew, Robert “Boy” Kenneda. Survivors include his son, Paul Kenneda of Dallas, Texas. Serving as active pallbearers will be Don Rowan, Steve Cheatwood, James Kenneda, Bob “Hound Dog” Gormly Jr., Kyle Landers and Dennis Lucas. Honorary bearers will be Bruce Magness, Mark Been, Carl Been, Jerry McVeigh, Jeff Gormly and Jared Melson. Services will be under the direction of Parks Brothers Funeral Home, Okemah, Oklahoma and officiated by Steve Cheatwood. Online condolences may be made at www.ParksBrothersFuneralHome.com.

The family of Randy "Boomer" Kenneda created this Life Tributes page to make it easy to share your memories.

Send flowers to the Kenneda family.