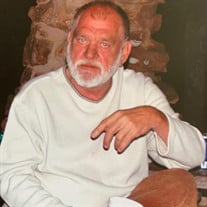 Military honors for Robert Earl "Butch" Coale will be conducted on Saturday, February 1, 2020 at 1:00 p.m. at the Okfuskee County Veteran's Monument located at the corner of 5th Street and Broadway in Okemah, OK., followed by a Celebration of Life at 2:00 p.m. at Lou's Rocky Road Tavern. Butch Coale was born to Earl and Clara Belle Coale on March 21, 1946 in Alameda, California. He died on January 16, 2020 in Shawnee, OK at the age of 73. Butch grew up in Okemah, OK, the youngest of three brothers. He attended Okemah Public Schools all of his life, graduating from Okemah High in 1964. While attending Okemah High School as a junior, he joined the Oklahoma National Guard. After Butch graduated from Okemah Schools, he attended college and married his high school sweetheart, Linda Kay Brimer, in April 1967, before he joined the regular Army and was deployed to Vietnam in 1968 as part of the 101st Airborne, 3rd/187th infantry unit, the Rakkasans. After he returned from Vietnam, Butch completed flight school in Ft. Rucker, Alabama and was stationed at Ft. Drum in upstate New York and at the Pentagon in Washington, D.C. He achieved the rank of major before leaving the military to be a pilot in the private sector. Butch's career as a helicopter pilot included flying to offshore oil rigs in the Gulf of Mexico, flying security at the 1984 Olympics in Los Angeles, CA, flying mediflight in Pittsburgh, PA, flying mediflight for the 1994 Woodstock Reunion, flying science crews for the University of Alaska at Fairbanks, and flying mediflight for OU Children's Hospital in Oklahoma City for many years before retiring. He completed his twenty years of military service by rejoining the Oklahoma National Guard during these years as well. When he was not working, Butch enjoyed traveling and camping with his wife and family, fishing and target shooting with his grandsons, boating on the Okemah Lake, and attending his Vietnam reunions. In his later years, he continued to enjoy watching westerns, doing his daily crosswords, watching his beloved Sooners play football, and spending time with friends and family. Butch was preceded in death by his parents Earl and Clara Belle Coale and oldest brother Dr. Tom Coale. He is survived by his wife Linda, daughter Jeremy Coale and long time boyfriend Wayne Knight, daughter Jami Lucas and husband Dennis, grandsons Coale and Lones, and great granddaughter Emberly, all of Okemah. Butch is also survived by his sister-in-law Charlotte Coale of Sapulpa, OK, his brother Jim Coale and wife Pat of Blanchard, OK, as well as many dearly loved nieces, nephews, and cousins. Services will be under the direction of Parks Brothers Funeral Home, Okemah. In lieu of flowers, please make donations to the Animal Rescue League of Okemah (ARLO), the Woody Guthrie Coalition, the Save the Okemah Water Towers fund, or the Dale K. Graham Veterans Foundation at P.O. Box 592, Washington, OK 73093.

Military honors for Robert Earl "Butch" Coale will be conducted on Saturday, February 1, 2020 at 1:00 p.m. at the Okfuskee County Veteran's Monument located at the corner of 5th Street and Broadway in Okemah, OK., followed by a Celebration of... View Obituary & Service Information

The family of Robert E. "Butch" Coale created this Life Tributes page to make it easy to share your memories.

Military honors for Robert Earl &quot;Butch&quot; Coale will be conducted...

Send flowers to the Coale family.