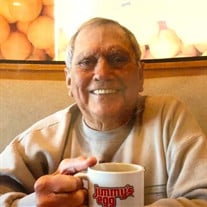 Fount Holland, a beloved father and grandfather, had many accomplishments. As a U.S. Marine, he fought the enemy during the Korean War. He was wounded in combat and awarded a Purple Heart. He did not finish high school with his Okemah class of 1951, but went on to earn his GED during the war… then his bachelor’s degree, master’s degree, and ultimately, his doctorate in education at The University of Oklahoma. He taught countless teachers how to teach as a professor and dean of education at Northeastern State University. He was a prolific grant writer and was known for attracting millions for rural schools, Indian education and youth job and training programs. Dr. Robert Fount Holland, 86, died Sunday, Feb. 3, 2019, at his home in Tahlequah. He would want you to remember him as someone who loved and cherished his family, volunteered for his country and for the thousands of “kids” transformed because of his career as an educator. Fount was born Dec. 16, 1932, in Ardmore, one of six children of Ray and Ida Duston Holland. He grew up in Ardmore, Sulphur and moved to Okemah when he was in junior high school. He attended Okemah High School through 1951, and was proud to be inducted into the Okemah Hall of Fame. Fount married LuCretia Fox on March 14, 1958, in Okemah. They celebrated their 49th wedding anniversary before her death in 2008. He began his career as a reporter at the Guymon Daily Herald before changing course to education. He taught ninth-grade social studies at Norman Junior High School for three years. He was later a principal in Parsons, Kan., and Stillwater High School. Fount and LuCretia and their children, Charla Raye and Fount II, moved to Tahlequah in 1971. Fount was a professor of education and dean of education at NSU. He wrote Indian education, TRIO, GEAR-UP and numerous other grants for NSU, countless rural schools and other institutions across Oklahoma and beyond. After retirement from NSU at 63, he founded his non-profit company QuESTT and administered workforce development and additional grants to train disadvantaged high school students to become first-generation college students. He worked for more than two decades in his Tahlequah office even until the week of his passing. He would often say the U.S. Department of Education had funded his grants through 2022 when he would have been 90 years old. Fount was preceded in death by his loving wife, his parents, a sister, Elsie, who died as an infant, his brother, Ray Holland, in 2002, and his sister, Mary Holland McGraw, who died just days ago at the age of 98. He is survived by his daughter, Charla Raye Nicklas, and her husband, Tom, of Tulsa; his son, Robert Fount Holland II, and his wife, Vicky, of Norman; four grandchildren, Duston Nicklas (Brooke) of Jenks, Ryan Holland Nicklas (Gabbie) of Tulsa, Brittany Raye Keeney (Jacob) of Manhattan, Kan., and Elliot Fox Holland of Norman; four great-grandchildren, Tinley, Avery and Anniston Nicklas of Jenks and Elijah Fount Keeney of Manhattan, Kan.; a brother, Curtis Holland, of Columbia, S.C.; a sister, Jimmie Porter, of Corvallis, Ore.; many more relatives and friends. Services will be at 2 p.m. Thursday, Feb. 7, 2019, at Parks Brothers Funeral Home in Okemah. Burial will follow in Okemah’s Highland Cemetery. A private military service will recognize his service in the U.S. Marine Corps during the Korean War. Services will be under the direction of Parks Brothers Funeral Home of Okemah, Oklahoma.

Fount Holland, a beloved father and grandfather, had many accomplishments. As a U.S. Marine, he fought the enemy during the Korean War. He was wounded in combat and awarded a Purple Heart. He did not finish high school with his Okemah class... View Obituary & Service Information

The family of Dr. Robert Fount Holland created this Life Tributes page to make it easy to share your memories.

Fount Holland, a beloved father and grandfather, had many accomplishments.

Send flowers to the Holland family.