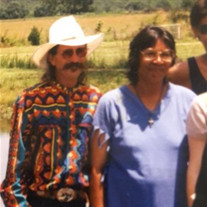 Funeral services for Robert Gene “Bob” Jones will be held Monday, October 4, 2021 at 2:00 PM at the Parks Brothers Funeral Home Chapel in Wetumka, Oklahoma. Interment will follow at the Wetumka Cemetery. Robert Gene Jones was born December 19, 1945 in Monterey Park, California. He passed away, Thursday, September 30, 2021 in Oklahoma City, Oklahoma at the age of 75. Bob grew up in California before becoming a resident of Wetumka, Oklahoma. He was a very skilled wood carver and was known for “Bob’s Woodcarvings”. Numerous pieces of his art are still treasured today all over the world. On June 14, 1997 he married Matilda Harjo; she later preceded him in death on June 28, 2020. Bob proudly served his country with the United States Army during the Vietnam War. During his service, he received the National Defense Service Medal, Vietnam Service Medal, Marksman (rifle m-14), Vietnam Campaign Medal and two Oversea Bars. He loved collecting old western movies, listening to old music, like the Beach Boys, and most of all restoring old hot rods. Also preceding him in death were his parents. He is survived by his daughter, Michelle Jones who resides in the south of France; his brother, Fred Jones of Coweta, Oklahoma and his sister, Catherine Bishop and husband Race of Wetumka. Serving as active pallbearers will be Carlos Sierra, Johnson Taylor, Brian Givens, Carl Hobia and Curtis Johnson. Honorary bearers include Les Dyer, Henry Harjo, Tiger Hobia and Andrew Hobia. Services will be under the direction of Parks Brothers Funeral Home, Wetumka, Oklahoma. Online condolences may be made at www.ParksBrothersFuneralHome.com

The family of Robert "Bob" Jones created this Life Tributes page to make it easy to share your memories.

Send flowers to the Jones family.