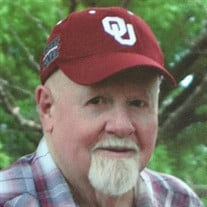 Graveside services Robert “Bob” Cleveland Vinson II will be held Saturday, April 10, 2021 at 11:00 AM at the Prague Cemetery with Pastor Scott Smith officiating. Robert “Bob” Cleveland Vinson, II passed away peacefully at his home at the age of 89 on April 3, 2021. He was born September 13, 1931 in Oklahoma City, Oklahoma to Robert Cleveland Vinson and Edna June (Adams) Vinson. Edna married Frank Gillum in Frederick, Oklahoma when Bob was young. He graduated from Frederick High School in 1949. Over the years he worked at White Auto in Hobart, Oklahoma, Kirby Vacuum in Oklahoma City and John McCormack Inc. in Albuquerque, New Mexico. In 1955, Bob worked for Sears in Carlsbad, New Mexico where he found his passion for selling appliances and won an award for selling $8,000.00 over a four day period. From 1959 to 1970, he worked for Sears in Clovis, New Mexico and later opened his own stores in Clovis and Roswell, New Mexico called Bob Vinson TV and Appliance Inc. After retiring he had many hobbies owning race horses, his favorite was Jet Storm. Over 45 years with the Elks Lodge and he was a huge fan of OU Football. His house is full of OU memorabilia. He always had an OU hat or jacket on. He was also a huge fan of Oklahoma Thunder Basketball. Bob was also a member of the Faith Christian Family Church in Clovis, New Mexico. He is preceded in death by his parents, Robert Cleveland Vinson and Edna June Gillum; his step father, Frank Gillum; his maternal grandparents, Carey Silvester Adams and Janice “Bertie” Atchley Adams; paternal grandparents, Caret Vinson and Ivey May Trotter and his son, Robert “Bobby” Cleveland Vinson, III , 1982. Survivors include his three daughters, Debra Tanner (Bill) of Okemah, Oklahoma, Robin Forneris (John) of Prague, Oklahoma and Vicki St. John (Mike) of Midland, Texas; seven grandchildren, Brandy Howard of OKC, OK, Shannon Tomlin (Nick) of Midland, Texas, Billy Tanner of Okemah, Derek Sheldon of Prague, Blaine St. John of Midland Texas, Adam Vinson (Abby) of Clovis, New Mexico and Bobby Vinson (Lisa) of Clovis, New Mexico; fifteen great-grandchildren, three great-great-grandchildren and his companion and caretaker, Ramona Wolfe. Services will be under the direction of Parks Brothers Funeral Home, Okemah, Oklahoma. The family would like to express their sincere gratitude to Interim Hospice for their great care of our father during the last several months. We were truly blessed to have you. In lieu of flowers, the family request donations to Interim Hospice 2300 N. Main Street, Suite 19-A, Clovis, New Mexico 88101. Online condolences may be made at www.ParksBrothersFuneralHome.com.

The family of Robert Cleveland Vinson II created this Life Tributes page to make it easy to share your memories.

Send flowers to the Vinson family.