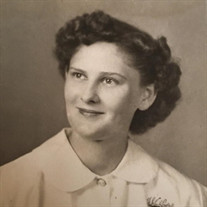 Ruby Irene Tucker, of Atwood, Oklahoma passed away peacefully on Sunday, January 31st, at the age of 86. Ruby was born on March 3, 1934 to Andrew Jackson McDaniel and Irene Bell (Burton) McDaniel. The last of six children, Ruby was the only daughter. A child of the Great Depression, she was raised on a small sustenance farm in Atwood and went to school at Atwood Public School. In high school Ruby played on two State Softball and two State Basketball Championship Teams. While walking home from basketball practice one day she caught a ride from a young man that lived down the road. This encounter would change their lives. Ruby McDaniel soon married Juan Tucker in a double wedding with Bob and Joyce Treat on April 25, 1952. The two couples remained lifelong friends and celebrated their 50th and 60th wedding anniversaries together. Ruby gave birth to their first child, LaJuana, in 1953 in Holdenville, while Juan was in the Army in Alaska, during the Korean Conflict. After a few months she moved to Alaska with their new daughter. They stayed a few years and returned to Oklahoma where she and Juan began college at East Central State College. Money was hard to come by so Ruby stayed home and Juan continued his education. Upon receiving his teaching certificate in 1958, they accepted a job in Parker, Arizona, and moved to a town they had never seen. With them Ruby carried her second child, Andrew, who would be born a few months later. Juan and Ruby loved Parker, teaching, the community, the reservation and mostly the people, but their heart always belonged to Oklahoma. For the next 25 years they would spend nine months in Arizona and their entire summer’s in Oklahoma building their ranch. In 1965 they were blessed with the addition of their last son David. David was born on May 28th, which coincided with the end of school, which always coincided with them leaving for Atwood. After giving birth, Ruby rested one day and on the 29th, she and her family loaded up their car and made the 1200-mile drive to Atwood. She was of hardy stock. Ruby spent most of her working years working as the secretary to the Superintendent of the High School in Parker. With five different superintendents through her career, she became a vital employee. So vital that they all allowed her to take her summers off to leave for Oklahoma. She was a trusted employee and a friend to the many students she mentored. Upon retirement in the early 80’s they left Parker for the last time and headed to Atwood for good. She and Juan became full time cattle ranchers until Ruby decided to get into the rental business. She bought, renovated, and managed several rent houses in the area. She and Juan were known for their hard work and their compassion for those in need. They continued to build their ranch while also spending time with family, most enjoyably grandchildren and great grandchildren. Ruby loved to cook for the little ones and always had an extra plate for guests. Her abundance of good food and welcoming warmth will be missed by all who shared time at her table. Ruby was the last surviving member of her parental family. She was also preceded in death by her husband of 67 years, Juan, in 2019. Ruby’s life was a beautiful life, and it continues in those she leaves behind. Her legacy includes, children, LaJuana and Dave Duncan, Andy and Claudia Tucker and David Tucker. Six grandchildren, Chase, Dustie, Kawika, Aaron, Joy, Luke, Matt, Kelly and Brenda. And six Great grandchildren, Zachery, Ryan, Hailee, Carmen, Sailor and Emerson. In addition, she has a host of nieces and nephews that she so enjoyed sharing her life with. The memory of her love of family, contagious laughter and gentle nature will be cherished by them all. The family wishes to extend a heartfelt thank you to the many caregivers that cared for Ruby and Juan for the last several years. Your caring, compassion and personal love for them was a divine blessing. You each made a significant difference in their life and we are forever thankful. Special thanks to everyone at Parks Brothers Funeral Home. Your ease and professionalism with our loved ones have offered us comfort and trust during difficult times. Due to health concerns and the safety of friends and loved ones, the family will hold a private family viewing from 1-5 p.m. on Wednesday, February 3rd. And an additional visitation open to all friends and family from 10 -2 p.m. on Thursday, February 4th at Parks Brothers Funeral Home in Okemah, Oklahoma. Upon warmer and safer conditions, the family will host a life celebration at their ranch where she and Juan’s ashes will be returned to the land they loved. In lieu of flowers the family asks that contributions be made to support the Allen Masonic Lodge in Allen, Oklahoma. All arrangements are handled by Parks Brothers Funeral Home. Online condolences may be made at www.ParksBrothersFuneralHome.com.

Ruby Irene Tucker, of Atwood, Oklahoma passed away peacefully on Sunday, January 31st, at the age of 86. Ruby was born on March 3, 1934 to Andrew Jackson McDaniel and Irene Bell (Burton) McDaniel. The last of six children, Ruby was the only... View Obituary & Service Information

The family of Ruby Irene Tucker created this Life Tributes page to make it easy to share your memories.

Send flowers to the Tucker family.