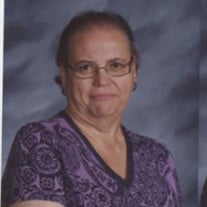 Funeral services for Sally Ann Moore will be held Tuesday, May 17, 2022 at 2:00 PM at the Parks Brothers Funeral Home Chapel in Okemah. Interment will follow at the Highland Cemetery in Okemah. Sally Ann Moore was born September 20, 1957 in Okemah, Oklahoma to James Coy Moore and Eula Inez (Neal) Moore. She passed away Sunday, May 15, 2022 at her home in Okemah at the age of 64. Sally was a lifelong resident of Okemah and a 1975 graduate of Okemah High School. She later attended East Central University in Ada where she a bachelor’s degree in 1979, master’s degree in 1983 in Education, Certification in School Psychometry in 1984, Certification as a School Psychologist in 2001 and a Master’s Degree in Counseling in 2002. Sally has been employed with Henryetta Public Schools since 1979 as a special education teacher, school psychometrist and school psychologist. She was an active member of the Landmark Baptist Church having served as church treasurer, music director and Sunday school teacher. Sally enjoyed going to family events, watching sixties and seventies tv shows, shopping for gifts for others and gospel singing. She is preceded in death by her mother, Eula Inez Moore and grandparents, E.L. and Mary Moore and Charlie and Ida Neal. Survivors include her father, James Coy Moore of Okemah; her two sisters, Wanda Nadeau and husband Doug of Tulsa and Shirley Bracken of Okemah; one brother, Vernon Moore of Okemah; nieces and nephews, Andrea Smith and husband Chris, Kelly Miller, Shelly Nadeau and Wesley Gardner and wife Brittany; great-nieces and nephews, Addison and Caiden Smith, Jacob and Jaxx Miller, John Diesel Ford, Jerad and Vagel Skinner and Alex Durrett and Gracie and Oliver Gardner Serving as active pallbearers will be Chris Smith, Jerad Skinner, Jacob Miller, Billy Green, Doug Nadeau and Mike Neal. Honorary bearers will be Howard Hobbs, Ardell Cruce and Bill Smith. Services will be under the direction of Parks Brothers Funeral Home, Okemah, Oklahoma and officiated by Bro. Larry Jones and assisted by Bro. Rick McVeigh. Online condolences may be made at www.ParksBrothersFuneralHome.com.

Funeral services for Sally Ann Moore will be held Tuesday, May 17, 2022 at 2:00 PM at the Parks Brothers Funeral Home Chapel in Okemah. Interment will follow at the Highland Cemetery in Okemah. Sally Ann Moore was born September 20, 1957 in... View Obituary & Service Information

The family of Sally Ann Moore created this Life Tributes page to make it easy to share your memories.

Funeral services for Sally Ann Moore will be held Tuesday, May...

Send flowers to the Moore family.