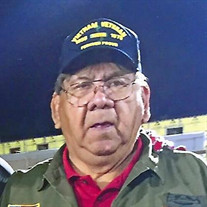 Funeral services for Sammie William Yahola will be Tuesday, February 4, 2020 at 2:00 PM at the St. Paul’s United Methodist Church in Okemah. Interment will follow at the Highland Cemetery in Okemah. Sammie William Yahola was born August 21, 1944 in Okemah, Oklahoma to Abraham and Gladys (Bear) Yahola. He passed away Saturday, February 1, 2020 in Tulsa, Oklahoma at the age of 75. Sammie was a 1963 graduate of Mason High School. On April 29, 1967, in Okmulgee, Oklahoma, he married Cindy Sue Cheek; she later preceded him in death on June 19, 2014. Sammie retired from Oklahoma Steel Casting Company in Tulsa after 30 years of employment. He proudly served his country with the United States Army 82nd Airborne Division during the Vietnam War. Sammie enjoyed watching sports and was a resident of Tulsa for over fifty years. Also preceding him in death were his parents, one brother and one sister. Survivors include his son, Kevin Yahola of Tulsa; his daughter, Kerri Yahola of Tulsa; one brother, Steve Yahola of Okfuskee and grandson, Austin Harrigill of Tulsa. Serving as active pallbearers will be Donnie Hill, Austin Harrigill, Raymond Checotah, Jarod Drew, Jared Bunner and Perry Cheek. Services will be under the direction of Parks Brothers Funeral Home, Okemah, Oklahoma and officiated by Bro. Grover Wind and assisted by Bro. Bryan McGirt.

The family of Sammie W. Yahola created this Life Tributes page to make it easy to share your memories.

Funeral services for Sammie William Yahola will be Tuesday, February...

Send flowers to the Yahola family.