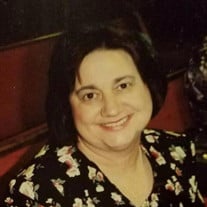 Sheila Verlene Welcher was born May 29th, 1952 in Okemah, Oklahoma to James Verlon and Esther Welcher. She passed away Thursday, April 14th, 2022 in Oklahoma City at the age of 69. Ms. Welcher grew up in Okfuskee County, on her family’s farm East of Okemah, and she was a graduate of Okemah High School. In 1982, she married her secret high-school sweetheart, Lindall McLemore and they were married for 10 years. She dedicated 30 years of service to Hertz, from where she retired and was dearly loved by all of her coworkers and friends. Sheila had a personality full of playfulness and curiosity. She was notorious for questioning the world in a way that others would never even consider, which led to brow-raising questions and never-ending laughs. She was also cantankerous! She’d argue with you in the most frustrating way, yet somehow leave you with a heart full of love for her. She loved Vegas. She loved conversations. She loved people unconditionally, and she could leave an impression on a stranger faster than anyone you’ve ever met. Everyone has a Sheila story! She was truly one of a kind, and she leaves behind a special space in her family that can never be filled. The world won’t be the same without Sheila, and she will be dearly missed. Preceding her in death were her parents, James and Esther Welcher. Survivors include her two brothers, Racy Welcher and wife Linda of Punta Gorda, Florida and Dobie Welcher and wife Susan of Okemah, 4 Nieces and their spouses: Tina and Ryan Smith, Michelle and Scott Hessman, Summer and David Smith and Rachael and Adam Cooper; and 15 great nieces and nephews. She also leaves behind many dear friends, including her long-time best friend, Chuck McLemore. All arrangements were handled by Parks Brothers Funeral Home, Okemah, Oklahoma. Online condolences may be made at www.ParksBrothersFuneralHome.com.

Sheila Verlene Welcher was born May 29th, 1952 in Okemah, Oklahoma to James Verlon and Esther Welcher. She passed away Thursday, April 14th, 2022 in Oklahoma City at the age of 69. Ms. Welcher grew up in Okfuskee County, on her family&#8217;s... View Obituary & Service Information

The family of Sheila Verlene Welcher created this Life Tributes page to make it easy to share your memories.