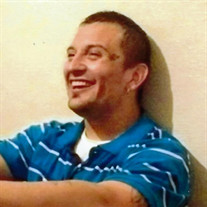 Funeral services for Steven Ray Dunson will be held Saturday, August 7, 2021 at 2:00 PM at the Thlopthlocco United Methodist Church of Okemah. Interment will follow at the church cemetery. Wake services will be Friday, 7:00 PM at the Thlopthlocco United Methodist Church with the funeral home arriving at 4:00 PM. Steven Ray Dunson was born September 9, 1993 in Claremore, Oklahoma to Gabriel Bible and Tana Dunson. He passed away, Tuesday, August 3, 2021 in Tulsa, Oklahoma at the age of 27. Steven was a resident of Tulsa, Oklahoma. He attended Mounds Public Schools as a child where he was a star athlete. Steven enjoyed hunting and fishing had worked in different fields of construction. He had a good heart and would truly help anyone in need. Steven will be dearly missed by those who loved him. He is preceded in death by his father, Gabriel Bible and grandmother, Linda Dunson. Survivors include his mother, Tana Dunson of Mounds; grandfather, Steve Dunson of Mounds; one son, Jaiden Tyler Dunson of Tulsa; two daughters, Bailey Renae Dunson of Tulsa and Aiyanna Aven Dunson of Broken Arrow; one sister, Briana Morrison and husband Steven of Mounds; aunt, Whitney Dunson of Mounds and great-aunt, Lorene Lusty of Okemah. Serving as active pallbearers will be Billy Aldridge, Kyle Lee, Steven Morrison, Matthew Grafton, Darius Houston, Bobby Daniels, Jonathon Watashe and Brandon Daniels. Services will be under the direction of Parks Brothers Funeral Home and officiated by Rev. David Dunson. Online condolences may be made at www.ParksBrothersFuneralHome.com.

The family of Steven Ray Dunson created this Life Tributes page to make it easy to share your memories.

Funeral services for Steven Ray Dunson will be held Saturday,...

Send flowers to the Dunson family.