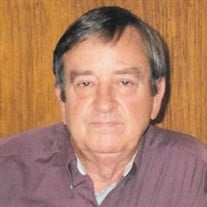 A Graveside service for Tommy Cecil Bowman will be held Wednesday, March 16, 2022 at 2:00 PM at Fairview Cemetery in Dustin Oklahoma with Bro. Curt Bellinger officiating. Tommy C. Bowman was born November 21, 1942 in Weleetka, Oklahoma to George W. and Naomi E. (Chapman) Bowman. He passed away Friday, March 11, 2022 at his home in Wetumka at the age of 79. Tommy was raised in Weleetka along with his siblings, Jack, Ludora, J H, Dale, Viola, and Harold. He married Martha L Maxwell in 1959 in Poteau, Oklahoma and to this union they had 3 children. They moved to the Texas panhandle where he worked during the wheat harvest during which their first child, Beverly, was born. They then moved back to Oklahoma. They moved to the big city where Tommy worked as a carpet layer for many years. Not long after, they had their sons Donald and later Darryl. In 1972 they moved to Wetumka, OK where they bought a grocery store with his sister-n-law and her husband known as B & W Market. They later sold their part and opened Bowman’s Carpet Store in Wetumka, OK. In 1979, Tommy went to work for the Frisco Railroad starting on the track gang, he worked his way up to the bridge gang then to transportation as a brakeman, then on up to conductor and ended as an engineer for the BNSF Railway. He loved driving the train and even once drove the Christmas train. He retired in May of 2008 after 29 years. After the passing of his wife Martha he met Melba Griffin who became his companion for over 14 years. He loved his family and hers as well. He and Melba traveled and enjoyed the casinos. They also went to concerts and enjoyed going to the lake. He is preceded in death by his parents; his wife Martha Maxwell; three brothers, Jack, Dale and Harold; three sisters, Ludora, Viola and Joyce, one daughter-in-law, Mona Rico Bowman and one grandson, Brandon Rico. Survivors include his brother, J H Bowman of Edmond, OK; Melba Griffin of the home; his daughter, Beverly Dilday and husband Les, of Wetumka, OK; two sons, Donald Bowman and wife Misty of Wetumka and Darryl Bowman of Healdton, OK; grandson Coal Dilday and wife Megan their children, Raylee, Delaney and Maggie Dilday; granddaughter Amanda Bowman and her children, Dagan Steverson and Paisley Bowman; grandson Robert Bowman and wife Ashley and their children, Azura, Aizen and Zyan Bowman; grandson Brandon Rico and daughter Satie Rico; granddaughter Rebekah Rico her daughter, Jalie and her son Bradon Rico; great grandchildren Malena, Natalie, Sophia, Heath and Dustin Rico; Grandson Cody Rico and wife Jessica their children Kyler and Levi Rico; granddaughter, Dixie Rico and her children, Halen and Theodore Rico; Johnny and Tammy Griffin, Connie and Larry Kellner. Tommy will be missed by his family and Melba’s family. Serving as pallbearers will be Coal Dilday, Robert Bowman, Cody Rico, Dagan Steverson, Johnny Griffin, Boone Griffin, Larry Guest and Larry Bowman. Honorary Pallbearers are Dan Brown, Richard Brown and Ray Bowman. Services are under the direction of Parks Brothers Funeral Home, Wetumka, OK. Online condolences may be made at www.ParksBrothersFuneralHome.com.

The family of Tommy Cecil Bowman created this Life Tributes page to make it easy to share your memories.

A Graveside service for Tommy Cecil Bowman will be held Wednesday,...

Send flowers to the Bowman family.