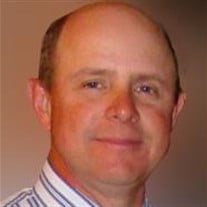 Funeral services for Tony Lee Dean will be Saturday, June 2, 2018 at 10:00 AM at the Okemah High School Panther Dome. Interment will follow at the Highland Cemetery in Okemah. Tony Lee Dean was born August 28, 1964 in Holdenville, Oklahoma to Bobby Lee and Sue (Turner) Dean. He passed away Monday, May 28, 2018 in Houston, Texas at the age of 53. Tony was a 1982 graduate of Okemah High School where he loved playing baseball for the panthers. After high school he graduated from Seminole Junior College and later received a Bachelor’s Degree in Agriculture Education from Oklahoma State University and Master’s Degree and Principal/Superintendent Certifications from East Central University. Tony and Monica Lynn Brinlee were married August 16, 1986 in Wetumka, Oklahoma. He started his teaching career at Moss High School from 1988 – 1996 where he was awarded the Oklahoma Young Farmer Outstanding Advisor award in 1995. He then came to Okemah Public Schools as an Ag Ed teacher and later as the Okemah Middle School Principal and eventually as the school’s superintendent. Tony loved sports and was a huge fan of OU and the New York Yankees. He helped coach softball at Moss, where he was involved with a state championship softball team. Also coaching baseball at Okemah schools placing regional runner up in 2006. He was extremely proud of Okemah Schools and athletics. His favorite saying was “Keep on keeping on.” Tony truly enjoyed working with his teachers and staff and especially loved and was proud of his students. His pride and joy were his boys and being able to coach them in little league sports on up into high school. He most recently enjoyed listening to them sing and play in their band and at different events. He was also an avid hunter and fisherman who enjoyed playing golf and softball. He used to play competitive softball with the “B&D softball team”. He attended the Assembly of God Church of Wetumka with his family He is preceded in death by his grandparents, Cecil and Reva Turner and Clyde and Janie Dean. Survivors include his wife, Monica Dean of the home in Okemah; their two sons, Chance and Seth Dean of Okemah; his parents, Bobby and Sue Dean of Okemah; his brother, Mark Dean and wife Roselynn of Okemah; father and mother in law, Hartsell and Joetta Brinlee of Okemah; sister in law, Brandi Anderson and husband John of Crosby, Texas; nieces, Marissa, Olivia and Erica Anderson; nephew, Turner Dean, and a host of family and friends. Serving as active pallbearers will be Richard Barrett, Stanley Klutts, Johnny Lesley, Skeeter Smith, Chris Duncan, Steve Deweber. Honorary bearers include Roger Johnson, Travis Scott, Chirs Dixon, Bruce Dunson, Josh Henry, Lee Vick, Andrew Minnich, Jason Bean, Jim Bill Copeland, James Halde, Ead Simon and Kale Simon. Services will be under the direction of Parks Brothers Funeral Home, Okemah, Oklahoma and officiated by Rev. Curt Bellinger and Rev. David Shatwell.

Funeral services for Tony Lee Dean will be Saturday, June 2, 2018 at 10:00 AM at the Okemah High School Panther Dome. Interment will follow at the Highland Cemetery in Okemah. Tony Lee Dean was born August 28, 1964 in Holdenville, Oklahoma... View Obituary & Service Information

The family of Tony Lee Dean created this Life Tributes page to make it easy to share your memories.

Funeral services for Tony Lee Dean will be Saturday, June 2,...

Send flowers to the Dean family.