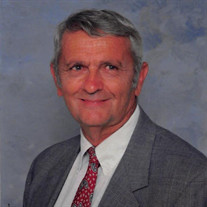 Van Rhea Hall, 84, began celebrating with his Heavenly Father on August 20, 2018, after a short illness with respiratory distress. His mother and father, Lena Maloy and Major Ben Hall, his brother Noel Bryan (Bud), and his daughter-in-law, Anita Gail, preceded him in death. He is survived by his wife, Lavora Bertis, son Jeffrey Bryan of Grapeland, TX, daughters Karen Ranae and husband Tom Hanks of Pittsburg, TX, and Janet Marie and husband Rick Richards of Littlefield, TX. Van had three sisters that survive his passing; Joy Mansfield of Edmond, OK, Sue Neal of Wichita, KS, and Sheryl Morgan of Moore, OK. Van was blessed with many nephews and nieces, grand and great-grandchildren that survive his passing. Van was born in Okemah, Oklahoma on December 18, 1933 to Major Ben and Lena Malloy Hall. Raised in the Okemah area, the family moved to Moore, Oklahoma where he graduated high school in 1951. Van attended Oklahoma University and Oklahoma City University in pursuit of a degree in Civil Engineering. In that pursuit, he worked while in college as a draftsman for the State of Oklahoma Highway Department. During this time, he met and married the love of his life, Lavora Bertis Anderson. They were married in Del City, Ok, on January 21, 1955. They were blessed with three children over the next four years, Jeff, Karen and Jan. The family relocated to New Mexico, where they served as House Parents for the Eastern New Mexico Christian Childrens Home in Portales while Van finished his degree in Civil Engineering at Eastern New Mexico State University. Upon graduation, he worked for the next nine years for the New Mexico State Highway department on bridge projects all over the state. One of his proudest projects was the Rio Grande Gorge Bridge near Taos, NM. In 1968, Van took a position as the engineer for the City of Wichita at the Intercontinental Airport. After several years with the City, he went to work for a utility contractor as Manager. He transferred to Tulsa Oklahoma in 1973 to manage their Oklahoma facility. After a couple of years he went to work for an engineering design firm where he developed a reputation as a housing development engineer. Several projects, such as Spunky Creek in Owasso and Flint Ridge near Tahlequah, demonstrated his love of natural settings; he designed roads that went around trees instead of clear-cutting a property. During this time, he also put two of his daughters through Oklahoma State University. Van and Bertis relocated to Rockwall, Texas in 1983 where Van was the engineer for Chandlers Landing as it was just starting development. Upon completion of that project, Van became a co-owner in a design firm for a number of years and turned his career toward design of golf courses, which included Buffalo Creek in Rockwall. He worked for the next few years collaborating on various private golfing communities with several Professional Golfers around North America, including the first “gated golfing community” in Old Mexico. Upon successful completion of this project, several more were also completed in Mexico. Van went back to work in Dallas as Engineer for Zachary Construction on the Dallas Area Rapid Transit system projects until 1999. Semi-retirement in 1999 brought Van and Bertis to Mt. Vernon, Texas where he worked for Eastex Crude Company designing and building oil storage facilities and airport hangers. In 2015, they relocated back to Rockwall, Texas. Van was raised in and a life-long member of the Church of Christ. He served as Deacon in several locations, and as Elder at Lakeside Church of Christ in Rockwall where he was a founding member of that congregation. This was one of his most gratifying achievements, chartering the Lakeside Congregation. He was also extremely proud of all three of his children and all six of his grandchildren graduating college. Van continues to receive much joy from his 6 grandchildren and 5 great grandchildren. Van will be laid to rest in the town of his birth, Okemah, Oklahoma in a private family ceremony. Van requested that in lieu of flowers, donations could be made to a fund that has been opened at the Eastridge Church of Christ, Rockwall, TX, in his name for future projects. All arrangements were handled by Parks Brothers Funeral Home, Okemah, Oklahoma.

Van Rhea Hall, 84, began celebrating with his Heavenly Father on August 20, 2018, after a short illness with respiratory distress. His mother and father, Lena Maloy and Major Ben Hall, his brother Noel Bryan (Bud), and his daughter-in-law,... View Obituary & Service Information

The family of Van Rhea Hall created this Life Tributes page to make it easy to share your memories.

Send flowers to the Hall family.