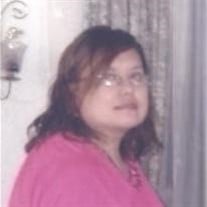 Funeral services for Vanessa Nicole Hicks-Harjo will be held Thursday, February 8, 2018 at 2:00 PM at the Okfuskee Indian Community Center on 48 Highway. Interment will follow at the Hanna Cemetery. Wake services will be Wednesday at 7:00 PM also at the Community Center. Vanessa Nicole Hicks – Harjo was born January 14, 1984 in Okmulgee, Oklahoma to Terry J. Hicks Jr. and Gracine (Billy) Hicks. She passed away Friday, February 2, 2018 in Okemah, Oklahoma at the age of 34. Vanessa was a resident of the Okemah area all of her life and was a 2002 graduate of Okemah High School. She and James Harjo were married November 1, 2014 in Shawnee, Oklahoma. Vanessa loved watching basketball; especially watching the kids play for the Mason Eagles. She was an avid Oklahoma State University fan and member of the Trenton Baptist Church. She is preceded in death by her grandparents; Frank and Annie Billy, Jessie and Lorene Hicks and step-grandfather, Joe Hicks. Survivors include her husband, James Harjo of Okemah; parents, Terry J. Hicks and Gracine (Billy) Hicks of Okemah; daughter, Kylie Rae Harjo of the home; three brothers, Oscar Hicks and wife Richenda, James Hicks and wife Leyahna and Brandon Hicks all of Okemah; two sisters, Terri Lyn Hicks and Judith Hicks both of Okemah; two aunts, Lisa Billy and Gloria Billy, whom was like a second mom, both of Checotah and special nieces and nephew, whom she thought of as her own children, Isaiah, Shaelyn and Amaya Hicks. Serving as active pallbearers are Jason Hawk, Tim Long, Timothy Harjo, Cable Gaskill, Colby Vass and Jon Hurt. Serving as honorary pallbearers are Oscar Hicks, Brandon Hicks, James Hicks, Isaiah Hicks and Stephanie Hawk. Services will be under the direction of Parks Brothers Funeral Home, Okemah, Oklahoma and officiated by Bro. John Grayson Jr.

Funeral services for Vanessa Nicole Hicks-Harjo will be held Thursday, February 8, 2018 at 2:00 PM at the Okfuskee Indian Community Center on 48 Highway. Interment will follow at the Hanna Cemetery. Wake services will be Wednesday at 7:00... View Obituary & Service Information

The family of Vanessa Nicole Hicks-Harjo created this Life Tributes page to make it easy to share your memories.

Funeral services for Vanessa Nicole Hicks-Harjo will be held...

Send flowers to the Hicks-Harjo family.