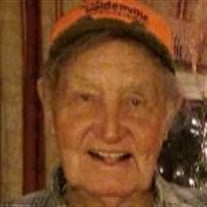 Funeral services for Walter Gilliam Dearman will be held Tuesday, September 17, 2019 at 2:00 PM at the Victory Christian Center in Okemah, Oklahoma. Interment will follow at the Rock Creek Cemetery south of Okemah. Walter Gilliam Dearman was born September 18, 1935 in Okemah, Oklahoma to Taylor Rudell Dearman and Lizzie (Nolen) Dearman. He passed away Friday, September 13, 2019 in Tulsa, Oklahoma at the age of 83. Walter had been a lifelong resident of the Okemah area and was a graduate of Bearden High School. He and Mary Fish were married March 5, 1960 in Okmulgee, Oklahoma. Walter retired after 25 years of employment with the Ford Glass Plant and also worked as a farmer and rancher. He enjoyed fishing, going to church, camping and going to the lake. Most of all he loved spending time and watching his grandkids play ball. Walter had attended the United Pentecostal Church of Okemah and was currently attending the True Life Tabernacle of Bixby, Oklahoma. He also proudly served his country with the United States Army during the Korean War. He is preceded in death by his parents; three brothers, Paul, Jackie and Obe; two sisters, Pauline Ford and Martha Vaught and one grandson, Nathan Ashley. Survivors include his wife, Mary Dearman of the home; two sons, Johnnie Dearman of Okemah and Jerry Fish of Sapulpa; two daughters, Connie Dearman and husband Kenny Lake of Okmulgee and Rose Mary Dearman of Okemah; one sister, Obelene Clark of Okemah; one brother, Albert Dearman and wife Florence of Okemah; 9 grandchildren and 13 great-grandchildren. Serving as active pallbearers will be Johnny Dearman, Jerry Fish, Kelwin Ashley, Jeremy Reddout, Fred Ashley and Roger Clark. Honorary pallbearer will be Randy Bell. Services will be under the direction of Parks Brothers Funeral Home, Okemah, Oklahoma and officiated by Bro. Rodney Stacy and assisted by Bro. Raymond Stacy. Online condolences may be made at www.ParksBrothersFuneralHome.com.

The family of Walter Gilliam Dearman created this Life Tributes page to make it easy to share your memories.

Funeral services for Walter Gilliam Dearman will be held Tuesday,...

Send flowers to the Dearman family.